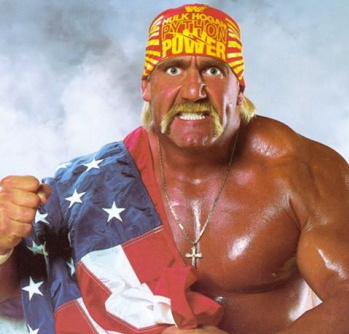 "Train, say your prayers, eat your vitamins, be true to yourself and be true to your country...BROTHER!!!"
"CM Punk says each and every single one of you DON'T. COUNT. You have no idea—no idea—how much each and every single one of you count. You count to me, for all that you do: All the love, all the support! It IGNITES me. It MOVES me. It INSPIRES me. That's why, in this moment, I'm reaching out my hand to all of you around the world; to all of you who believe! All of you who have faith! All of you who live your life gettin' knocked down, gettin' right back up, just to say, JUST BRING IT!"
— Dwayne "The Rock" Johnson, 2013 Royal Rumble prematch speech

You're the face, YAY!

A Face, short for Baby face, is a Professional Wrestling good guy. He's the guy the fans get behind, the one they cheer for. A face used to always be an upright do-gooder, but nowadays, anybody the fans cheer for is generally classified as a face, regardless of personality or whether or not they play by the rules. The opposite of a face is a Heel.

Some fans draw a distinction between "face" and "babyface". It's argued that the latter should refer to the old-school, clean-cut, "eat your vegetables" type good guys, and the shortened version is simply anybody fans cheer for, including a wide variety of Antiheroes, Nominal Heroes and Designated Heroes. Insiders in the pro wrestling business, however, use the two interchangeably. Some fans also call for the distinction of Tweeners for villains that receive a hero's welcome, though bookers and promoters themselves only slowly started embracing the concept in the late 1990s as, despite perceptions, most wrestlers wanted to be seen as pure face or heel for whatever show they happened to be working on.

The Lucha Libre equivalent is known as a técnico (or more rarely technico) which is more about the method they take to win (técnicos are content to rely on valid wrestling techniques, whereas heels cheat or use brute force) but is the same in practice more often than not. To further confuse, in British wrestling (such as World of Sport), the term used is "Blue Eyes."

The types of babyface, in order of cleanliness, are:

1. The Whitemeat. The hero who gets beat up constantly, before heroically and miraculously snatching victory from the jaws of defeat. The whitemeat places particular emphasis on morality and virtue. (Cheating heavily is part of being a heel.) We're told that they're fighting against all odds to win the titles they're striving for. They have a tendency to always trust wrestlers, no matter how many times they've betrayed him/her in the past: Sting had a history of joining tag teams or stables full of vicious backstabbers when he really should have known better (leading to the phrase "Sting-level dumb"). They exist mostly to carry out good deeds and make the kids happy.
Ricky "The Dragon" Steamboat is one of the Trope Codifiers for these babyfaces, and was notable for never being a heel once in his entire career. Rey Mysterio Jr. is headed down the same path.

2. The Underdog. Many bookers still think a "World Champion" has to resemble the classical image of a pro wrestler. They're hung up on the look. The character of a face is different, though. The average guy's build (Cruiserweight/Light Heavyweight) makes him the natural underdog. He understands that he's outclassed by the likes of Cena, Styles, and Haitch, so he picks his movements very carefully. A cunning performer knows how to create and take advantage of underhanded opportunities in the ring. The underdog beat the system, got over, won the title and got the girl? Every normal guy's dream.
Bret Hart defined this trope in the '90s, and Chris Benoit did so in the 2000s until his downfall. A major reason Daniel Bryan got over is because he was clearly not "the chosen one", despite massive fan support.

4. The All-American. He is a real American. He fights for the rights of every man. He fights for what's right, fights for your life. He feels strong about right and wrong. The whole concept of "America vs. The World" is 80's kayfabe distilled to its purest and most ludicrous form. Some of the biggest pops and most involved crowds have been the result of "We the People!" or "USA! USA!" chants against your Evil Foreigner of the week. Draped in a flag, defending the honor of his country (separate to a degree from his heritage); it's almost the only way to guarantee a strong crowd reaction.

Wrestlers with any sort of non-white (e.g. Wild Samoan) or otherwise "exotic" identity are an interesting topic. A non-evil foreigner is a wrestler whose gimmick revolves around a group identity (usually patriotism). Alternatively, they may appeal to certain subgroup of xenophiles. Their entrance music and attire will heavily-invoke cultural symbols, if not being draped in a flag itself. Two commonly-cited examples are Bruno Sammartino and Pedro Morales, who were pushed to appeal to Italian and Puerto Rican diaspora in the US, respectively. Bob Sapp was hired by New Japan for looking like the kind of loony black man one would find in an anime.

A decorated member of the United States Marine Corps needs your support. AND HIS NAME IS JOHN CENA! "Hacksaw" Jim Duggan played this gimmick to the point of parody: he would interrupt other countries' anthems.

5. The Fat Guy. Mass × Acceleration = Force. In some ways, the look and the wrestler are intertwined: It imbues them with a sort of "don't give a fuck" mentality. It also helps him stand out, since the majority of the roster is cut, and that might catch peoples' eyes more. Also, "cut" sometimes doesn't translate well into actual ring performance, since a lot of that is for show. Mind you, there is a line of separation between, say, Mark Henry and Yokozuna. When you're built that large, you have to work your weight into your gimmick and play to the Wrestling Monster trope.
Dusty Rhodes was never in good shape, but that didn't stop him from reaching the top while being beloved by all. Kevin Owens can do a 180° on the top rope into a moonsault or wrestle a 30-45 min match with "Superman" himself.

6. The Anti-Hero. Heels are allowed to be flawed people, and so are almost inherently more interesting than babyfaces. Solution? Be punk rock and go rebel. This guy is more of an anti-authoritarian, comedic dick, rather than a true hero. He stands up for himself against the bosses, calling legends like Nash "Old and irrelevant", and does whatever he wants to whoever he dislikes and whenever he pleases. It's not "out of character" for him to do dickish things, since the entire point is that the heel made it O.K. to do. At the same time, he is a human with real human failings. That's why the Attitude Era babies worked.
Swig o' beer for The Rattlesnake! CM Punk spoke truth to power and became the poster-child of this type of face in the Summer of '11, Randy Orton goes into this phase whenever he's a face, and a massively miscalculated Face–Heel Turn in the Summer of '18 allowed Becky Lynch to become the first woman to ever be face of WWE as a straight-talking, no-nonsense scrapper sick of watching others steal her opportunities.

Sometimes, those responsible for airing the show having to make a public "appearance," be it in the form of the company owner, a proxy such as a General Manager or a representative from an athletic commission to level the playing field when the babyfaces are up against particularly unfair odds, assigning match stipulations to ensure cheap finishes will not recur. Unlike the heel authority figure, they usually don't appear frequently enough to develop a character; just enough to establish their existence so fans won't be confused if a ruling is made.note While Vince McMahon is the company owner (in addition to managing Raw), even this was solved via George Jetson Job Security i.e. the "board of directors" when Vince logically got fed up and tried to fire the loose cannons in his federation. Most female wrestlers are booked as half-heel, half-face. This appears to be by design, with little concern about the heel/face dynamics. Mildred Burke, crowned NWA World Women's champion based on her matches with Clara Mortenson, popularized female wrestling in the U.S. during the thirties. But she was frozen out of the industry, leading her to take her own promotion overseas. (Japan, Canada, Mexico, Australia and South America can trace their womens' wrestling to Burke.) The other reason why U.S. women's wrestling is often booked as a teen drama is due to the way The Fabulous Moolah trained her girls (enough to sell magazine photos), and that was by her own example: A hair whip, scratches, slaps, snapmare, headlock, and that's it. As a result, there remains a specific sort of female babyface in the States who struggles to earn respect while competing in a "male" division, but they can just as easily draw heat by harassing the male babyfaces. Chyna and Jacqueline are two noteworthy Tweeners who competed in areas they didn't 'belong' in.

Like many things in pro wrestling, a wrestler's status as a face is anything but permanent; "baby face" is a pun on "about face" after all, and a heel turn could come at a moment's notice.

The Heel/Face Index has more examples. There's also the Tweener, a guy who falls in-between Face and Heel status, whichever the situation calls for. (George "the animal" Steele was always portrayed as more misunderstood than heel. He never pulled anything on his own that a heel didn't put him up to.) In Lucha Libre, the typical Rudo relies on brawling and underhanded tactics, and doesn't display much finesse or technique when he fights—and he's probably rude, too.

Unrelated to The Face.

open/close all folders
Pro wrasslin' examples
Other works
"Whatcha gonna do, brother, when Tropemania run WILD on YOU?!"
Feedback