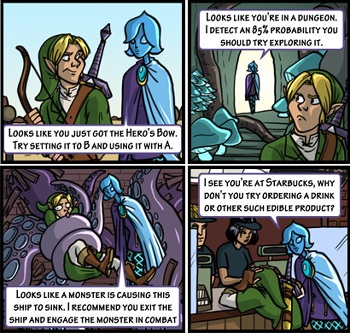 She's only trying to be helpful.
"Who the hell is this guy? 'Hail fellow adventurer!' Terry the Adventurer? His name is Terry? Who the fuck is Terry? Seriously! Who? What the fuck is Terry doing here? How did Terry get here? Why did Te — [laughs] Is Terry here to rescue the Mayor, too? I mean, he's gotta be, right? Why else i... Did Lord British hire Terry? I mean, he should, because this guy is awesome! I mean, he got here first; he's better than me, looks like. Shit, Terry, looks like you got this one handled, man. Honestly, I think I'd just get in your way."
— Noah Antwiler on Ultima: Runes of Virtue
Advertisement:

A recurring or sidekick character whose purpose is to fill you in on elements of the interface and your abilities. Sometimes, they will also offer hints or help players in the form of Notice This. Some sidekicks have a tendency to do this too often, at which point the player is likely to shout, "Stop Helping Me!"

Many more recent games with Heroic Mimes use this so the game has a character who can actually have reactions to the plot, and engage in dialogue with other NPCs. In this case, they not only act as a tutorial of sorts, but keep track of the story and help move it along.

Frequently a Fairy Companion, hence the name. For modern-day humanoid variants, see Mission Control and Voice with an Internet Connection. See also Pet Interface. Can overlap with Expressive Health Bar if they let you know you're low on health. Sub-Trope of Mr. Exposition.