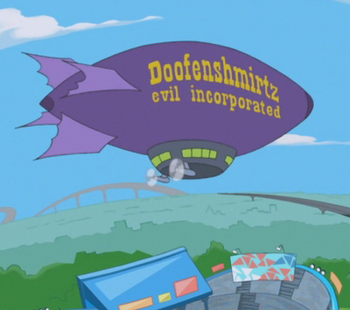 "The NEVIC corporation, who are evil because they're a corporation in a sci-fi game. They might as well have been called There's Shit We're Not Telling You Ltd. Formerly traded as Hope You Haven't Watched Any Alien Films Lately PLC."
— Zero Punctuation, Lost Planet 3

Evil Inc. is the standard Lex Luthor back-up plan: Create a front that, in case anything goes wrong, gives you the perfect alibi as well as the resources to start again. They will be one of three types:

Regardless of which type, they will always have one basic goal: Take Over the World.

When Evil Inc. would make more money without being used as an evil front, it's an example of Cut Lex Luthor a Check. When Evil Inc. is a legion of super heroes gone awry, it's a subversion of Heroes "R" Us. When it's actually succeeded, more or less, in taking over the world, it's turned into Mega-Corp. Toxic, Inc. is a subtrope, where the company is depicted as not just evil but with a specific focus on pollution.