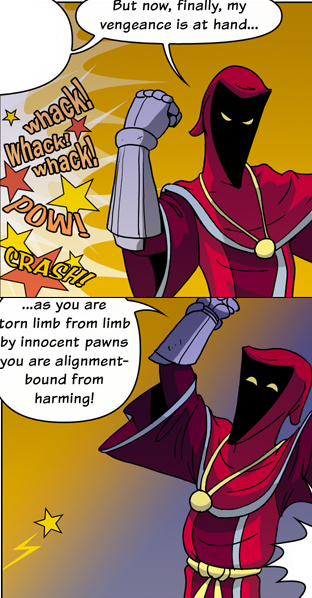 "If you have to look along the shaft of an arrow from the wrong end, if a man has you entirely at his mercy, then hope like hell that man is an evil man. Because the evil like power, power over people, and they want to see you in fear. They want you to know you're going to die. So they'll talk. They'll gloat. They'll watch you squirm. They'll put off the moment of murder like another man will put off a good cigar. So hope like hell your captor is an evil man. A good man will kill you with hardly a word."
— Terry Pratchett, Men at Arms
Advertisement:

Gloating. Monologuing. It's what villains do. Maybe they "set up us the bomb" and are calling to rub it in and take credit, perhaps he's just snatched the MacGuffin from the hero's very hands and insist on staying just out of reach to taunt. Maybe the villain finally has the hero at his mercy and just has to taunt him one last time before shooting him.

Or perhaps this is the place where they finally have a chance to get all the reasons they despise the hero personally off their chest. Any mistakes the hero makes are also fair game for villainous gloating. At any rate, while this is a villainous staple on par with a hero and In the Name of the Moon, it's still one of the things the Evil Overlord List strenuously warns against, as any villain caught gloating is sure to be either killed or foiled, as in the end his gloating always ends up giving the hero that little bit of extra time or information that helps him counter the villain's Evil Plan. In their defense, it's really fun and gives you that warm evil feeling in the black pit of your soul when you utterly grind your opponent's face into the dirt. Unfortunately, most villains fail to grind hard enough. But how could anyone appreciate the brilliance of your scheme unless you explained it to them?

Another way this could easily backfire is that it goes hand in hand with Engineered Public Confession. A savvy hero can use it as an easy way to reveal the Chessmaster or Manipulative Bastard to the world and bring their plan crumbling around them.

This also goes hand in hand with Evil Plan, where it's practically required to give the hero and viewer exposition of just what the heck is happening. Expect the villain to let out an Evil Laugh and start to Trash Talk about how the hero(es) are powerless to stop his Evil Plan. It can greatly surprise them when the hero interrupts with Get It Over With.

Heroes tend to not gloat, which is why villains facing a Sword over Head will usually either be allowed to live or killed without (much) fanfare: compare After-Action Villain Analysis. Instead, heroes expect the villain to do this, so there may be a Have You Come to Gloat? moment.

This is one of the most well mocked villain cliches, but is very much an Undead Horse Trope. For one thing it gives a villainous character a great chance to act and flesh out their character a little more. For another, it's both Truth in Television and a very appropriate Fatal Flaw for the prideful, narcissistic characters who often become villains.

If they've just finished owning The Hero, this may have been preceded by Ominous Adversarial Amusement and is sure to become "The Reason You Suck" Speech, but don't worry, a Thwarted Coup de Grâce is coming up. If they are making their speech only for their opponent to use it as an advantage, that person was most likely Caught Monologuing. May overlap with Trash Talk. See also Villain Ball and Did You Actually Believe...? Has some similarities to the Motive Rant.

Roger Ebert coined the Trope as "The Talking Killer" in his book Little Movie Glossary.

Example of:
Fate Worse than Death