Everything's Better with Monkeys
aka: Everything Is Better With Monkeys 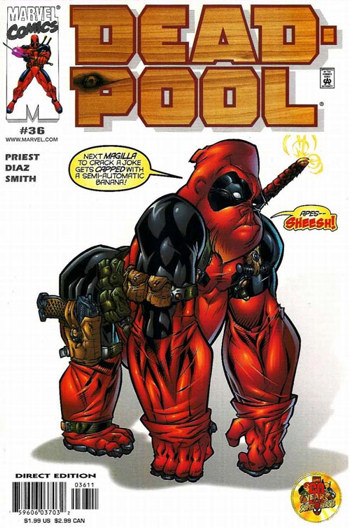 Some people find apes, monkeys, and lemurs inherently amusing. Perhaps it's the fact that they mirror humanity so closely while still maintaining the visage of a wild animal, perhaps it's just easier to anthropomorphize them, or maybe people just like poop-tossing jokes? Whatever the reason, there's a cyclic period of people being fascinated by primates that always seems to take the world of fiction by storm.

This has long been noted by comic book authors, who, during the Silver Age, took every opportunity to insert, turn people into, or otherwise add gorillas to a superhero story. In fact, DC Comics had a policy at the time limiting the number of "monkey" issues per month, to prevent everybody from doing it!

This is sometimes associated with the tastes of the Lowest Common Denominator, who view the ultimate form of entertainment as a top-hat-wearing, diaper-wearing, cigar-smoking chimp riding a tricycle.

A chimp with a diaper—ha ha… Wait, we didn't visualize that until just now. Ha ha ha!

This trope is named for a Superdickery.com subpage. And yes, we know it ought to be "Everything's Better With Non-Human Primates" too. After all, everything's also better with apes, who are technically not monkeys in the popular sense.note It should be noted, however, that apes are cladistically a specific type of monkey - they are the sister group of the Old World monkeys, together forming the catarrhine clade

of simian primates. The animals we refer to as monkeys would be more accurately called "non-hominoid monkeys". The difference is actually very simple - in layman's terms, monkeys have tails, while apes (including chimpanzees, gorillas, orangutans and humans) don't.note Although there are some non-hominoid monkeys, like Barbary macaques, which lack visible tails, and some humans do grow tails, but this is an abnormal growth of the tail bone for apes On the other hand, the word "monkey" is simply funnier. (Unless you're addressing a certain librarian or an expectant chimpanzee father…)

The image of the peaceful, childlike, and funny caveman, usually a member of the Neanderthal people group, technically belongs in this trope. For that matter, one could say a cast of comedic humans or extinct hominids qualifies, however this trope tends to focus on non-Homo primates.

There has been some controversy in recent years over the use of trained primates in film and television, so don't expect a lot of recent examples except, perhaps, computer-generated or cartoon ones. Lemurs are often still lumped in with monkeys despite the fact that they're not monkeys either,note Primates are classed by what kind of noses they have: monkeys and apes (including humans) are haplorhine (dry-nosed) primates, while lemurs, and their relatives the lorises and galagos are strepsirrhine (wet-nosed), primates. For comparison, their noses are more like a dog or cat's nose than a human's nose. but media still has a ways to go before it can make this particular distinction.

Apes and monkeys make fiction "better" in more ways than just comedy: they can be used for drama or even nightmare fuel if you're not going for laughs. In these cases baboons and mandrills are big favorites because they're more menacing than, say, sifakas or chimps. Gorillas, of course, can be used either way because they're seriously badass—see Gentle Giant and Killer Gorilla. If you want long-suffering pathos, orangutans are a good choice.

Alternative Title(s): Everything Is Better With Monkeys