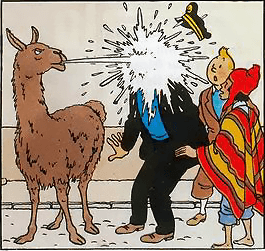 "And for comic relief he should go right through some sort of village, with a fiesta or something happening, with llamas. He knocks a llama over."
— Steven Spielberg discusses the arrival of Indiana Jones to Nepal during the brainstorming session that created

Raiders of the Lost Ark
Advertisement:

If Everything's Better with Penguins, the same is true for llamas. Maybe it's the extra silent "l", or the whole spitting thing, or the resemblence to the word lamer. Whatever the case, llamas are funny.

Other llama-like camelids like alpacas, guanacos, and vicuñas are fair game too. (Actual camels aren't; when they show up in fiction they're almost always Horsing Around but worse.)