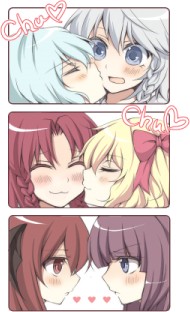 Scarlet Devil Mansion seems to be Gensoukyou's version of a lesbian bar.
What else could I say?
Everyone is gay.
— Nirvana, "All Apologies"

The tendency for Fan Fic and other fan works to include an improbably high proportion of characters that are homosexual/bisexual/pansexual, even if the original work contains no indication of such a thing. Works possessing a Cast Full of Pretty Boys or an Improbably Female Cast are especially susceptible to this, as there's virtually no choice for shippers to avoid this route other than applying a Gender Bender or Rule 63, or adding in their own original character, which by many is considered far worse. Often considered a form of Canon Defilement and Character Derailment, although obviously those perpetuating it mostly disagree.

Het Is Ew can be the culprit, and unfortunately in these cases any remaining heterosexual characters often fare poorly, if not ending up suddenly evil or dead.

Compare and contrast Everyone Is Bi. If this occurs in official works and sanctioned adaptations, then it's a Cast Full of Gay. Adaptational Diversity is a common reason behind this trope. Sometimes fanfiction writers just want to see people like them. More than that, though, it's the usual suspects.