"Everybody Laughs" Ending
aka: Everyone Laughs Ending 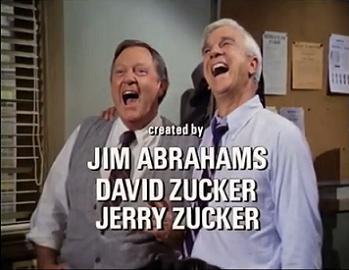 Gadget: Sometimes I can't tell what you guys like more: eating nuts, or driving us nuts!
[everybody laughs]
Ellie: I've always wanted to do one of these laughs with you guys! How long does it last?
Gadget: The worse the joke, the longer the laugh!
— Chip 'n Dale: Rescue Rangers (2022)
Advertisement:

An Everybody Laughs Ending is exactly what the name suggests: an episode (usually from a Saturday-morning cartoon from the 1960s all the way up to the 1980s, though live-action comedy episodes have also been known to do this) that ends with all the main protagonists laughing, either at one last joke the writers squeezed in, at the expense of the Plucky Comic Relief character, or as part of the defeated villain's Humiliation Conga. This may be intended to let the viewer know that whatever problem the episode focused on has been vanquished and everything is fine and just as it should be. Often follows the characters learning an Anvilicious Aesop or And Knowing Is Half the Battle. The return of a Brick Joke from the start of the episode is a common way of setting this up. Especially satisfying if the characters plant their fists on their hips and throw back their heads Boisterous Bruiser-style.

This trope is so common (especially in episodic or vignette-driven stories) that it doesn't always come at the literal end of a work. It might instead come at the end of a sequence, particularly as a way of letting an audience know that a particular segment is over. In any case, it's been rapidly becoming a Discredited Trope in works aimed at older audiences since at least the mid-nineties, and is rarely played straight any more outside of media aimed at younger viewers.

A dark subversion often occurs with villains, especially those of the Faux Affably Evil variety. Someone (either one of the more outspoken good guys or a tactless Mook) will say something that offends the Big Bad. After an agonizing pause, the villain will unexpectedly start to laugh, encouraging everyone else to laugh along. After some painfully forced laughter, the villain will suddenly stop chortling and mete out Disproportionate Retribution on the one who insulted him, up to and including outright murder. (These are covered more specifically under Laugh with Me! and HA HA HA—No.)

Often a form of Contagious Laughter. It exists in a variant where a character still makes a lighthearted joke after the main action, but instead of everybody laughing, everybody does a Collective Groan.

Compare Oh, Cisco! (the episode ends on one last short joke right after a commercial interruption), "YEAH!" Shot (in works aimed at children or very far on the idealistic end of the spectrum), Actually Pretty Funny. Can happen after a Shock-and-Switch Ending.