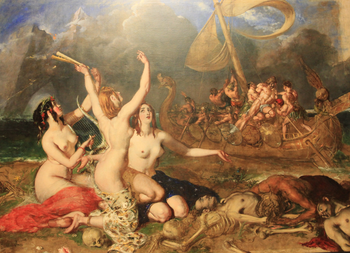 And you sang, "Sail to me, sail to me,
Let me enfold you,
Here I am, here I am
Waiting to hold you"
— Tim Buckley, "Song to the Siren" (later covered by This Mortal Coil)

Sirens are enthralling creatures who lure victims to them through supernatural means. They lure these people to their doom, though not necessarily immediate death. In some versions, their powers only work on men. This detail is entirely Newer Than They Think (for example, Princess Ariadne is killed by sirens in some versions of the myth) and has no basis in the original myths. In fact, the idea of sirens being an Always Female race is itself likely Newer Than They Think; while rare, male sirens did show up in Ancient artwork.

They have enthralling voices, while their appearance ranges from very attractive, to very attractive after you've been at sea for a long time, to Glamour or Mind Control covering up a very unsavory reality. If they'll actually change their form to something ideally perfect in the eyes of their victims or at least project a vision of the same, they'll either have some form of Glamour or be a Shapeshifting Seducer. The method they typically also use is Mind-Control Music. In a modernized Urban Fantasy setting, she may be depicted as an Evil Diva.

They are at least humanoid, though the lower half is flexible. In Classical Mythology, sirens were strictly women-faced birds, but many modern depictions give them a greater amount of humanoid attributes. In may modern depictions of sirens, however, the bird characteristics will be dropped altogether and they'll be just beautiful women with beautiful voices, if they aren't mermaids, as bird-women nowadays are usually harpies. Likewise, it's fairly common for harpies to be given siren characteristics such as the alluring voice.

Alternative Title(s): Our Sirens Are Louder