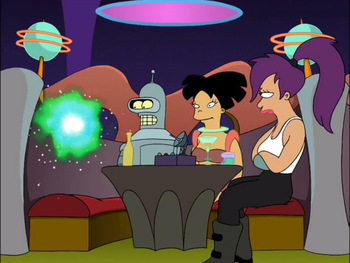 Creatures that dispense with the need to have a body altogether.

Energy Beings are frequently Sufficiently Advanced or Precursors; in fact, non-physicality is a common prerequisite, though they may take on A Form You Are Comfortable With. Often times this means that when they "Touch" a corporeal being it has interesting side effects. Other times they are the result of when a species Ascend to a Higher Plane of Existence.

Even cheaper and simpler to pull off than Rubber-Forehead Aliens —  they're usually just a blurry blob of light superimposed onto the screen, or maybe a cloud of colored smoke, or they may be outright invisible — which explains why Energy Beings and Human Aliens so often dominate the demographics of the Final Frontier. The Angelic Aliens and Starfish Aliens especially may appear in this form.

Never mind that being "made of energy" makes as much sense as being "made of weight". This shows that many still don't know what the word "energy" really means.

It is also considered nonsensical because "energy" beings usually act more like floating clouds of luminescent gas. So a better term to use here might be "gaseous beings". Or, they might just plain be made of stars.

They may often be used as a way to represent gods, angels, the afterlife, and similar subjects without dealing with the religious connotations normally attached to them.

Of course, Energy Beings share many characteristics usually ascribed to concepts such as spirits and souls, often making them an example of Sufficiently Analyzed Magic.

See Made of Magic for a more fantastic version.