Enemy Mine
aka: Enemy Of My Enemy 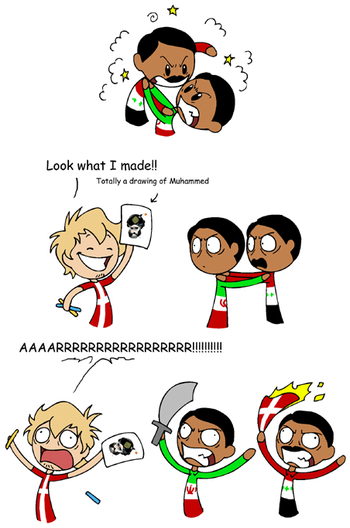 How Denmark made Iran and Iraq agree on something.
"Look, even if you think we're still enemies, we're enemies with a common interest: revenge. You like revenge, right? EVERYBODY likes revenge! Well, let's go GET SOME!"
— GLaDOS, Portal 2
Advertisement:

A scenario where foes must work together to achieve a common goal. (The trope name comes from one particularly famous example.) Note that this is different from Villain Team-Up or Legion of Doom: although all three involve two parties working together to achieve a common goal, this trope usually involves two rivals that have opposing views (such as being good vs being evil) while the latter two involves characters that share similar views (such as both of them are evil), though they don't necessarily like each other.

This type of team-up usually starts with the villain coming to the hero's aid, usually saying that a certain threat is a danger to them both, or "No one kills you but me!" when they save the hero from certain doom. May arise from a Mexican Standoff. After the team-up, the villain will usually let the hero live for now because they were so useful, so everything can return to status quo.

Frequently, if it is a goodie-baddie partnership, the baddie will look for opportunities to pull something that gets them a profit (or, in the case of really bad baddies, allows them to stab the goodie in the back). If the villain doesn't betray the hero right away, but there is still animosity between them while they are working together, then you have Teeth-Clenched Teamwork. If the Status Quo is not maintained, there could be a creep towards Friendly Enemy status. Can become a Heel–Face Revolving Door if it happens more than once.

Sometimes the baddie is more the hero's Worthy Opponent than a villain and the external threat will be truly evil. In this case, the hero will recognize that the third party is the bigger/more dangerous threat and the Worthy Opponent will be offended that the third party intruded on a 'private game'. Afterwards, it's a pity to see them go back to their old rivalry, because together they're an unstoppable fighting force. (If they don't, they've become Fire-Forged Friends.)

Finally, this is an opportunity to show the villains as being more competent than they typically are. While they're defeated by the heroes week after week, the bad guys can actually contribute to the defeat of whatever threat they're teaming up with the heroes against.

More short-term deals fall under Cooperation Gambit. When there's no common enemy per se, it's Go-Karting with Bowser. If the villain saves the day without the hero's help, then Bad Guys Do the Dirty Work. If the villain in question is possessing the hero, but there's a greater threat the two must conquer together, this can result in a Symbiotic Possession.

Compare Nominal Hero, a character who fights for good even though their intentions are not heroic at all; Mediation Backfire, where someone tries to get between two quarreling characters, only for them to put aside their differences to abuse the peacemaker; and Conflict Killer, who suddenly and permanently defuses the conflict of others, causing the others to join forces against the former, as well as Embarrassing Rescue and Gondor Calls for Aid. See also Enemy Civil War or Elves Versus Dwarves (with which it often overlaps). Anti-villains are more prone to this trope than most, and less likely to backstab the goodies afterwards. Contrast with Personal Hate Before Common Goals and We ARE Struggling Together, where you have putative allies who end up backstabbing and/or infighting with each other. When this trope is averted completely, one has a Mêlée à Trois or Mexican Standoff. See also An Offer You Can't Refuse, Colliding Criminal Conspiracies, Contempt Crossfire, Do Well, But Not Perfect, Genghis Gambit, Inevitable Mutual Betrayal, and Tall Poppy Syndrome. A defining feature of the Standard Sci Fi Setting. May be a result of the Good and the Bad teaming up in a The Good, the Bad, and the Evil scenario. It can be caused by The Horseshoe Effect.

We sincerely hope that you did not have a slip of the finger and ended up here instead of at Enemy Mime. For an enemy that is a mine, see Action Bomb, and for a different kind of mine which is filled with enemies, see Dug Too Deep. As might be gathered by this point, this article is also unrelated to passive defensive weapons planted by one's foes. Also not related to mines of the underground type; for that, see Underground Level or Minecart Madness. Wholly unrelated to Quote Mine, which refers to the propaganda tactic of being very particular in quoting someone the propagandist disagrees with to convey an inaccurate conception of their actual opinion and/or why they said that.