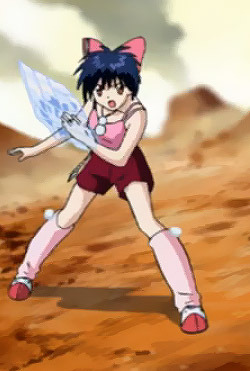 Yes, her element is ice. Yes, that's a volcano behind her.
Advertisement:

Let's say you, the average fire mage get into a bit of a scuffle and find yourself in a duel to the death. Don't worry, it's not your fault really, but you don't really have a choice here. Now you, being a fire mage, know that you happen to be very well versed in the art of using fire, you may even say it's your lifeblood, your modus operandi so to speak. You know the intricacies of fire in and out. Your opposing duelist allows you to select between several locations to have the duel. You can choose the fiery volcano, the dry, arid, hot desert, or the bottom of the ocean. Which do you pick? The ocean, of course!

Wait... what? This trope is when, for whatever reason, the characters insist on using the most illogical matchup possible, like using the fire hose on the water mage, or the ice princess in the volcano field. Now, sometimes this may be justified if, say, the person, despite having a disadvantage, has some other good reason to fight them. This may include wanting revenge, having an intimate knowledge of the opponent, despite being weak to his element (say, two water mages fighting each other, despite them being resistant to each other's attacks), felt like some Cherry Tapping, or just because even though they're at a type disadvantage, they outclass the opponent in sheer strength and experience.

For it to be this trope, there should also be some better alternative; if the mage decides to use water spells on the ice elemental, despite having fire spells at his disposal, it's this trope. On the other hand, if the mage who only has water spells is forced into fighting the ice elemental, and has no other options or items that would be better to use, it's a poor matchup; however, since they were forced, it didn't require any ignorance or poor planning (except maybe bad life planning for finding himself in a situation with an ice elemental) and is therefore not this trope.

This also may provide an excuse for writers to allow the character to overcome adverse conditions and show growth when they win a very difficult battle from their sheer disadvantage, but often comes off as a cheapened experience, since more often than not the audience is left saying, "well, that's great! But why didn't they just pick the other guy?" Especially when their hard counter (or the fool they accidentally sent in) is someone with a definite theme any blind idiot could divine like Poor, Predictable Rock. If a team does this and during combat they realize their mistake, this may lead to an Opponent Switch.

Note that for Video Games, only list examples in the story, characters discussing or otherwise noting the trope, or notable exceptions, such as games where choosing to fight with the worst counter is secretly the best option. Otherwise every game with Elemental Rock–Paper–Scissors will be on here, since with any game with type matchups, the player can deliberately make bad choices.