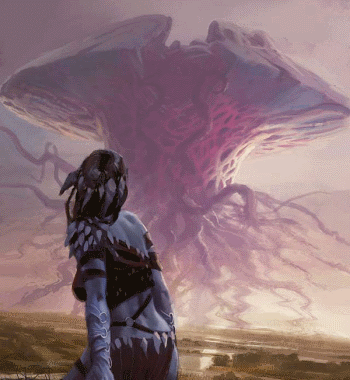 "Here, on the horizon, was everything Gideon did not know."
"There was a darkness outside reality, they say — a darkness full of things. Hungry, nasty things with no shape or form, not as long as they were out there."
— Kurt Busiek, "Storms of the Heart", Astro City
Advertisement:

The Alien. The Other. The Inconceivable. The Eldritch Abomination is a type of creature defined by its disregard for the natural laws of the universe as we understand them. They are grotesque mockeries of reality beyond comprehension whose disturbing otherness cannot be encompassed in any mortal tongue. Humans suffer Brown Note or Go Mad from the Revelation effects just from witnessing their Alien Geometries. Reality itself warps around them. Any rules that they do follow are beyond our understanding, as are what motives they might have for any of their actions.

Native to the Cosmic Horror Story genre dabbled in by authors such as Caitlin R Kiernan, Robert W. Chambers and H. P. Lovecraft, the Eldritch Abomination has become a mainstay of horror and fantasy works, along with numerous others that popularly derive inspiration from Lovecraft. They are often used as a Greater-Scope Villain, Outside-Context Problem, Mad God, God of Evil or Sealed Evil in a Can. If it's truely a faithful alien however, it shouldn't even be "evil" in the typical sense. As they are defined by existing outside reality as we conceive it, most also come from somewhere beyond the stars or before the dawn of time or outside our universe.

Physically, the Eldritch Abomination is only defined by seeming somehow “off”, hinting at their incomprehensible nature. They can range from humanoid to animalistic to physically impossible to inconceivably bizarre. However, common physical characteristics include similarities to internal organs, genitalia, animals with tentacles, or celestial bodies.

The power of these beings can greatly vary. Some of which can be defeated by mortals, usually via a special weapon specifically meant to kill them, some of which are more powerful than gods, but are often still able to be defeated. In the Cosmic Horror Story genre, however, these beings are usually unbeatable, or are technically beatable, but will result in a Pyrrhic Victory with an incredible cost. The most often used element for a Cosmic Horror Reveal, at which point, expect such a creature to be the Final Boss.

Subtrope of Our Monsters Are Different and Our Monsters Are Weird. Though note that a monster being really powerful, weird or ugly is not, in and of itself, an example of this trope. The monster must break the established internal logic of the work.

Thanks to the nature of this trope, potential Real Life examples are very vague and questionable at best. So No Real Life Examples, Please!