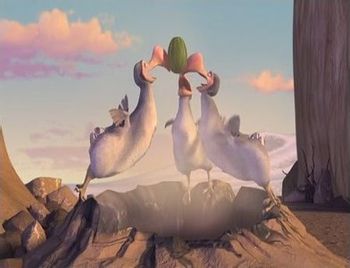 Hey, look at that. Dinner and a show.
Advertisement:

Many creatures have become extinct throughout Earth's history (It is estimated that 99% of all life that has ever existed on Earth is currently extinct). But while different kinds of Stock Dinosaurs are usually selected for prehistoric settings, there are a variety of other species of extinct animals that come to mind when thinking of the past. One of these creatures is the dodo bird, which is kind of the poster-child when someone thinks of an extinct species.

The dodo was a flightless bird that lived on Mauritius, an island in the Indian Ocean east of Madagascar that wasn't discovered until 1507. It is placed in the same family of birds as pigeons and doves (Columbidae). If you look at a baby pigeon and depictions of the dodo side by side, you might discover some similarities. Due to their isolation, they were naive towards predators and were wiped out within a few decades of their discovery, so quick in fact they were believed to have been mythical for a time. However, their images were recorded in various books about animals and various tissue and bone fragments have been discovered on Mauritius in modern times. With their rather goofy-looking appearance, they eventually became a popular animal choice in media of various sorts.

Usually a dodo in media is a comedic, dim bulb whose inability to fly often leads to jokes at their expense. Due to being extinct, they also sometimes appear alongside animals that died out a much longer time ago in pre-historic environments. They can sometimes act as Cloudcuckoolanders or The Fool. In short, Dodos are never taken seriously. But there are some cases where the trend is averted, or at least subverted, if the dodo isn't entirely stupid or out of their mind that is usually the case.

A case of Historical Downgrade. Technically a Subtrope to Dumb Dinos as dodos, being birds, are dinosaurs. See Dogs Are Dumb and Moose Are Idiots for other animals portrayed with similarly low intelligence. Compare The Dinosaurs Had It Coming for another self-inflicted extinction.