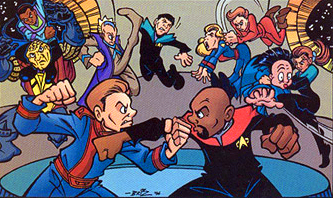 ).
"There's some splendor, but a whole lot of warfare in the grass, in A Bug's Life, the latest computer-generated insect film of the year. Did I ever think I'd ever say that sentence? And who ever thought we'd get two in one year?"
— Gene Siskel referring to A Bug's Life and Antz, Siskel & Ebert
Advertisement:

This page is a list of similar works (similar genres, similar media categories, similar plots, etc.) made by different creators during the same period of time. Sometimes one work intentionally copied another. Sometimes it's part of a wider trend in which that type of work became very popular all of sudden and others are made. Sometimes it's total coincidence: the creators just had the same idea. Which is the original and which is the imitation is not always completely clear; sometimes, however, it is painfully so.

To qualify as a duel the two works must meet the following criteria:

See also The Mockbuster. Not to be confused with Dueling-Stars Movie.

Again, just to be clear: The works have to be produced during the same time period (within one year of each other or with overlapping runs in the case of series), otherwise you've got either Follow the Leader or Serial Numbers Filed Off. Also see Fandom Rivalry.