is a theory of story which proposes that a story is really an allegory for a person's mind trying to solve a problem. In Dramatica, a complete story is produced when an issue has been fully explored by examining all possible solutions; a story's characters and plot are the thoughts and frame of this mind in tangible form, while Plot Holes and other inconsistencies occur when an argument is incomplete or the mind wanders off topic. In Dramatica, an incomplete argument (a broken story) is called a tale.

Dramatica provides a highly structured system that relies on selecting between multiple categories and subcategories of general ideas to produce the structural basis for the author's Central Themes. The theory is complex—too complex for a deep dive here on TV Tropes—but you can find guides on the official website

for the jargon (there is a lot of jargon), and a collection of hundreds of movies seen through the Dramatica lens

. The website also offers story-planning software driven by Dramatica principles; it's pricey, but for those who can't afford it there are free copies that offer the full suite of story-planning services at the cost of not being able to save your files.

But even if it's too complex for full coverage, we can still cover the basics.

In Dramatica there are four viewpoints that the mind trying to solve the problem, the story mind, can interpret the problem through. None of these viewpoints is necessarily more important or prominent than the other.

The Main Character, Protagonist, and Hero

We said earlier that the main character doesn't necessarily have to drive the action of a story, to pursue the goal. This is because the main character is defined by the possession of a certain viewpoint and not by what he actually does in the story.

In Dramatica, the character that is dedicated to pursuing a story's supposed goal is called The Protagonist. The protagonist is one of Dramatica's archetypal characters; these are characters with simple, easy-to-understand jobs in any plot. A story doesn't need these archetypal characters—the author can split up and rearrange their jobs if he wishes, but their simplicity allows the author more room to focus on the Central Themes.

The eight archetypal characters are listed below. Each of them is the direct Foil of another.

The distinctions between those last four is subtle—in Dramatica's jargon the sidekick offers support, indirect aid, while the guardian offers help, direct aid; likewise the skeptic indirectly opposes while the contagonist directly hinders. To support or oppose is to manipulate advantages (such as morale or resources) of other characters, while to help or hinder is to contribute effort towards or against objectives.

In Toy Story, Woody is the hero, having both the main character and the protagonist roles. He directs the toys both at Andy's and Sid's house and seeks to reunite with Andy after being separated from him while and considers whether to take Buzz with him. 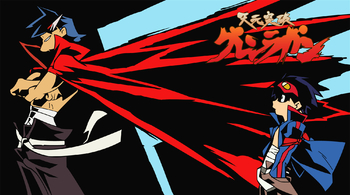 Protagonist on the left, Main Character on the right.
Gurren Lagann, on the other hand, cleanly splits the respective protagonist and main character roles between Kamina, who founded and runs Team Gurren (no matter if it's just him and Simon or a whole platoon of renegade humans), and Simon (a helpless dweeb who thinks lowly of himself and admires Kamina). Even once he dies, it's Kamina's memory and example that continues to inspire and encourage Team Dai-Gurren.

A complete story has a lot of working parts, and that can be a lot of balls for any author to juggle. Dramatica recommends the author at least know the answers to the following questions.

What is the Main Character Resolve?

Does your Main Character Change his way of dealing with the problem at the heart of the story (such as Ebeneezer Scrooge’s switch to generosity in A Christmas Carol) or remain Steadfast in his convictions (such as the innocent Dr. Richard Kimble in The Fugitive)?

What is the Main Character Growth?

Does your Main Character grow by adopting a new useful trait (Start) or by outgrowing an old inappropriate one (Stop)?

What is the Main Character Approach?

What is the Main Character Problem-Solving Style?

What is the Story Driver?

What is the Story Limit?

What is the Story Outcome?

Do your character’s efforts to achieve the overall story goal result in Success (such as killing the shark in Jaws) or Failure (such as not being able to open the dinosaur theme park in Jurassic Park)?

What is the Story Judgment?

Does the Main Character resolve his personal problems and feel Good (such as Luke finally trusting his skills in Star Wars) or not resolve them and feel Bad (such as Clarice Starling still being haunted by her childhood memories in The Silence of the Lambs)?

The questions of the story outcome and judgment provide four possible endings to any story:

What is the Overall Story Throughline?

If you pull back and look at the story from a bird’s eye view, which general area best describes the nature of the problems ALL the characters are dealing with? Does the story’s conflicts stem from a Situation, an Activity, a Fixed Attitude, or Manipulations?

Each of these last four questions is designed to prompt the author to start selecting between Dramatica's multi-layered system of narrative elements—the Throughline is the topmost, most general layer, and each layer gets more complex as you approach the problem. Special attention should be paid to the Issue layer, which is the basis of the Central Theme, the philosophical conflict informing the specific problem.

This particular question has a lot of Dramatica jargon built in, but in general:

What is the Overall Story Concern?

Which area of concern are ALL the characters in your story interested in or worried about regarding the overall story goal?

This is the second topmost level, where the initial four throughlines are focused into more specific topics.

For example, both Toy Story and Tengen Toppa Gurren Lagann have an Overall Story Throughline of Situation and an Overall Story Concern of How Things Are Changing. (They differentiate at the Issue and Problem levels, though).

In both stories, the characters are all concerned with the loss of the status quo, but in Toy Story, the change is inevitable; Andy's family is moving and the toys can only prepare. In Gurren Lagann's first arc, mankind wages war to overturn the status quo imposed by the undying Beastman Empire. (Gurren Lagann's second story arc consists of the results of overturning that status quo).

What is the Overall Story Issue?

What is the thematic issue that affects all of your characters in your story?

What is the Overall Story Problem?

What is the source of the central problem that affects all your characters in the story?