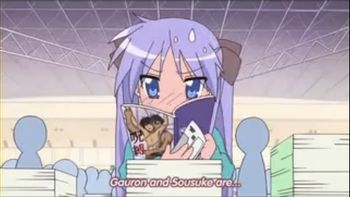 The second most popular form of doujinshi is video games, often programmed by one person or a very small group. Probably the most well-known of doujin soft producers, and one of the few to cross over into commercial game production, is Type-Moon. The Touhou Project games constitute possibly the longest-running series of doujin game productions, since the first one was released in 1996 and as of 2020 there have been 29 games in the series, although there are other potential contenders to that throne.

Technically, it's near-impossible to import doujinshi, and the makers are well aware of this. Nevertheless, there are online stores that carry them with worldwide shipping for dedicated importers and artists (mostly musicians) who offered their work outside of Japan. Also, there exist proxy buyers that one can hire in order to buy everything one wants, given that stores like "Toranoana" or "Melonbooks" can't export overseas. Additionally, most doujinshi falls under Denial of Digital Distribution because of copyright issues and/or a belief that digital distribution goes against the "doujin spirit".