Don't Try This at Home
aka: Do Not Try This At Home 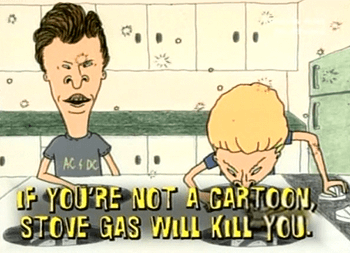 In short: Become a cartoon.
"CAVEAT: Bringing about Armageddon can be dangerous. Do not attempt it in your own home."
— Terry Pratchett and Neil Gaiman, Good Omens
Advertisement:

A mandatory disclaimer heard at least once, and often more times, during any show which presents outrageous stunts or death-defying acts of derring-do. Mandatory because there are more than a few morons out there with so little common sense that they will actually try these things without the proper training and then sue everybody in sight when they get hurt (or their family will do it for them when they get killed or forgot/don't know how to sue). Sometimes played for laughs within a show, as a character turns to the audience and says "Do not try this at home" before beginning the most comically dangerous part of the Zany Scheme.

Compare Do Not Attempt (for less-than-realistic stunts) and Do Not Do This Cool Thing (when the warning rings hollow to the awesome thing being performed). Sister Trope to And Some Other Stuff, when key parts of a dangerous formula or device are obscured to prevent any attempt at replicating it from going horribly right. Contrast Never Be a Hero. See also Life Imitates Art, Our Lawyers Advised This Trope, and Television Is Trying to Kill Us.

Tammy says the phrase as she, Wallace and Dante start trying to defeat a zombie.

Tammy says the phrase as she, Wallace and Dante start trying to defeat a zombie.