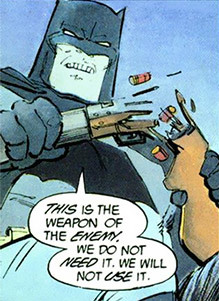 Rose: Doctor, they've got guns.
The Doctor: And I don't. And that makes me the better person, don't you think? [insufferably cheerful] They can shoot me dead, but the moral high ground is mine!
— Doctor Who, "Army of Ghosts"
Advertisement:

Sometimes there's a specific reason that their distaste is limited to the gun, such as a particular incident from his past or a sense that guns are "unsportsmanlike" or "cowardly". Some characters will even take a Heroic Vow against the use of guns. But most of the time, there's just a Writer on Board who wants to show that a character is moral enough to hate overt tools of violence like guns while glossing over the fact that they're in a show where a lot of violence has to be unloaded on people. Pressure to reduce violence with firearms in media in general, or the desire of an anti-gun author to teach us all An Aesop may also play a part.

While other forms of lethal violence will still be lethal, they translate less literally to Real Life, since it's less probable anyone in the audience could successfully dish out pain the way the hero does. Not everyone is a master martial artist who can kill with their bare hands, but anyone with a functioning couple of fingers could conceivably pull a trigger and get lucky. This also allows the story to be more action-oriented and dramatic when guns could end the tension much quicker. (BANG! — "ooh, ya got me!")

Most superpowered beings don't use guns, because frankly they don't need them. Why bother with a gun when you can already shoot stuff out of your hands, eyes, and/or mouth? Or when you're faster than a literal speeding bullet, you might as well just run up to the other guy and punch him in the face since it would take less time than shooting him.

This can also be an excuse for the hero to MacGyver up some Bamboo Technology rather than just shooting the bad guy. Remember, MacGyver himself may normally refuse to use guns, but even he's not above firing a steering wheel knob out of a cannon, as long as he made the cannon out of a car muffler with his own hands.

It's common for the Blood Knight to not like guns, primarily because he loves fighting, and guns make fights end more quickly, which means less fun for him. He might also think guns are for cowards who are too chicken to fight up close and personal. See Technical Pacifist as well, where, even if a Technical Pacifist still beats the crap out of people on a heartbeat, he will generally not use a gun. Related to Heroes Fight Barehanded.

This is not necessarily a Heroic Trope, and a character hating guns does not mean they follow a Thou Shall Not Kill philosophy.

Sometimes brought on by Executive Meddling or by the Media Watchdogs stooping over the cartoons, and may forgo replacing guns by removing them altogether.

If used in an anvilicious manner, the trope may veer into lawful stupid when the protagonist foregoes the use of guns, and misses opportunities to stop evil.

A Super-Trope to Con Men Hate Guns. Often overlaps with Firearms Are Cowardly.

Alternative Title(s): Gun Hater, Does Not Like Guns, Guns Are For Wimps