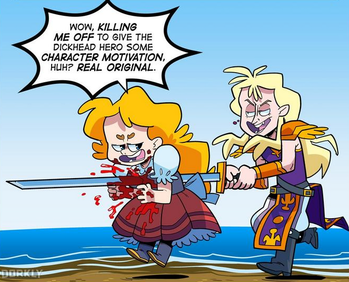 At least she's not ending up in a fridge.
"Needless violence against a woman character who is only significant as an object of a male character's desire? Hot damn, I'm a real comic writer now!"
— Brian Clevinger, on this comic

This character has a familial or romantic relationship with a protagonist, which allows creators to derive heart-wrenching sorrow from her death. Thanks to "woman" being a unique character trait, character development is not strictly necessary to get the audience mourning as well... so she typically gets little or none. Losing her is often an Inciting Incident (in both stand-alone and serial works), giving the protagonist a pretext for Revenge against her murderers. In a series, she is easily forgotten by the characters, forgotten by the writers or even summarily replaced. When this happens frequently in a series, the protagonist is suffering from the Cartwright Curse.

Men can and have been treated this way in various stories, though such cases are rare. More often, Men Are the Expendable Gender, allowing for dozens of comrades-in-arms to die before equating to the same level of personal investment as a single female love interest, not to mention their mother/sister. Expendable characters of any gender are freely used to let a villain show off how evil they are without damaging any of the more important characters. The "disposable" character remains defined by her relationship to the protagonist, rather than by her gender.

For that matter, not all dead female characters are "disposable". Writers can have the characters continue to mourn her long past a revenge arc, or develop the character in Flashbacks and Dream Sequences. Such characters are The Lost Lenore. Lenore continues to have a recognised impact on the characters and story after her demise rather than conveniently vanishing from the minds of characters, audience, and creators after having served her function as catalyst. A "disposable" character, on the other hand, had almost zero characterization before she stopped appearing in the work.

Compare Temporary Love Interest, where a character has a serious relationship with a character who is quickly written out of the story to preserve the status quo, and Her Heart Will Go On, where a Love Interest is killed off to showcase the protagonist specifically dealing with the Emotional Torque of losing a loved one. See Collateral Angst.