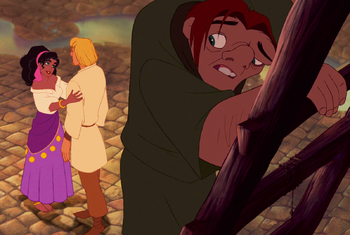 This trope is when The Protagonist — who is clearly not celibate — doesn't end up with the Love Interest. Someone else wins her heart or she has no choice but to marry someone to save her family or something. For whatever reason, the hero ends the story alone. It can be played either for comedy or tragedy. It isn't always a Downer Ending or a Bittersweet Ending, but it sure does tend to be that way.

Despite the name, this trope can just as easily apply to not getting the guy. Of course, the idea of a person being something to get, like she or he is a possession, can be troubling to ponder.

Related to No Romantic Resolution (the resolution here is: it didn't work out). Compare to Better as Friends and Romantic Runner-Up. Contrast Everything but the Girl, where the protagonist usually does get the girl eventually. Not to be confused with two leads not ending up together because one of them dies — that is a different trope, Death of the Hypotenuse when one of the leads is the hypotenuse of someone else, and Platonic Life-Partners where neither of them wanted each other in the first place. See also Dump Them All, where the protagonist rejects all of his Love Interests instead of them leaving him.

As this is an Ending Trope, unmarked spoilers abound. Beware.

Gloria finally gives all the courage to confess her feelings for Kevin, but he politely turns her down because he's not looking for anything at the moment.

Gloria finally gives all the courage to confess her feelings for Kevin, but he politely turns her down because he's not looking for anything at the moment.