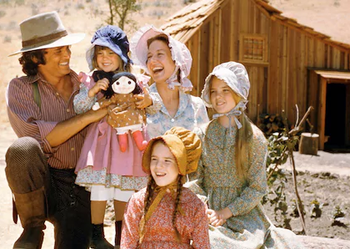 Offspring of the Determined Homesteader and the Determined Homesteader's Wife. Homesteaders tended to have large families, resulting in Massive Numbered Siblings. They provided a future for the homestead (and when old enough could homestead adjacent territory to add to the family farm), were a handy source of free labor, and—let's face it—there wasn't much else to do on long winter nights. And they were often willing to take in foster children of relatives or neighbors.

Most visual media will go for smaller numbers of children, to save on budget, screen focus, and the difficulties of working with child actors. Even literary works often cut it down for the focus problem. This is usually Justified by having high child mortality, which was, in Real Life, what usually kept the count of children down.

Perhaps the most frequent use of the Determined Homesteaders Children in fiction is to have one befriend The Drifter, inducing the stranger to help the homesteaders against whatever hazard the farm is facing. They will also help with chores, sometimes leading to a plot complication when something goes wrong under their watch, or they make an error.