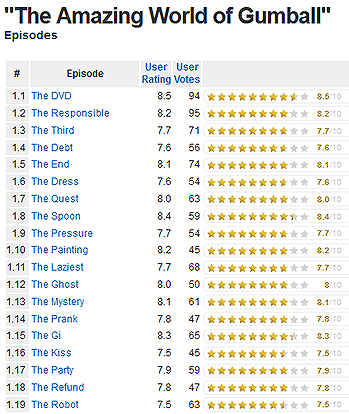 Works usually have titles prefaced by a definite article, like "The" in English or "Das" in German, which, in combination with the noun following it, refers to a specific, individual instance of that noun, in contrast to indefinite articles, like "A" and "An", which usually refer to an abstract concept of a noun, like "The Table" vs. "A Table".

And so, "The" item being referred to is singled out as important.

These names are often things like (to take examples from the popular Animorphs series): 'The Experiment', 'The Escape', and so on. If an author uses this trope to excess, expect the names to get a little odd (The Happening), confusing (The Unexpected) or downright unhelpful (The Attack, The Threat). The author may also get really carried away with the "The" count and "The" the title until it makes little grammatical sense.

See also Spell My Name with a "The". Inconsistent use causes The "The" Title Confusion, where it's unclear whether or not something begins with a "the".

The Titling is a Sub-Trope for when the word after the "The" is a gerund, i.e. "The [verb]ing", referring to the occurrence of an action, a.k.a an Event Title.

The Noun Who Verbed and The Title Saga are tropes that likely have this occur in tandem, but not always.

The Case Of, however, is a Sub-Trope of this, as "A case of" just doesn't work.

Alternative Title(s): The The Title