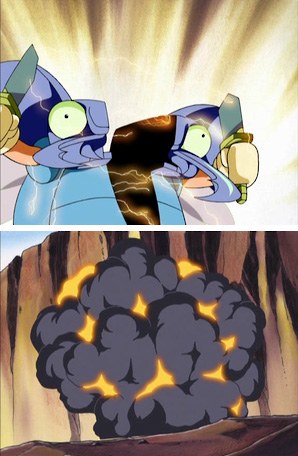 We lose more monsters that way.
"If I become an evil genius, I'll keep in mind not to replace my blood with nitroglycerin, hydrogen or any other flammable thing, I don't wanna die exploding like the bosses of Ninja Gaiden."
— Payasoplas, on Ninja Gaiden
Advertisement:

Sometimes an enemy being defeated... explodes. Not metaphorically like in the Villainous Breakdown sense, but in a literal, physical explosion.

In the case of robots, this could be justified, as the defeat could cause them to short circuit and the spark to ignite their fuel, but it is not limited to robots. It happens with characters who are not specifically stated to be robots, and in some cases are implied to be organic in some way or another. One would expect that this trope would be combined with Action Bomb more often to weaponize their imminent demise, but the two tropes rarely seem to go hand-in-hand (although not completely absent either). This might be because forcing the heroes to relocate the enemy someplace safer where environment and bystanders wouldn't be harmed would get old fast if it applied to all enemy deaths, thus killing the tension and drama at climax of combat.

Having every enemy explode upon death was more common in the 3rd and 4th generation of console gaming, when it was mainly done to avoid drawing death animations. This is also an effect of being already dead.

This trope arguably saw its inclusion in popular culture via Tokusatsu programs of the '60s and '70s, especially those of the Ultra Series, where this is a particularly common way for a defeated Kaiju to meet their end.

See also Explosive Overclocking, Post-Defeat Explosion Chain, Load-Bearing Boss, and No Body Left Behind. Can be a reason there's Not Enough to Bury. Contrast Why Am I Ticking? for when a character is turned into a bomb (which may or may not result in their defeat). Subtrope of Made of Explodium. Not to be confused with Out with a Bang, which involves dying in a more... pleasurable way. Can overlap with Technicolor Death.