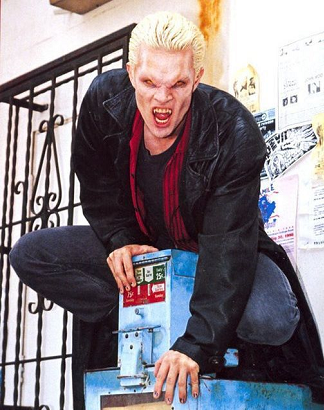 "Gotta get a newspaper every morning. I like to keep on top of the news."
Phoenix Wright: Objection! Vampires cannot surive in sunlight!
Demitri Maximoff: Hold it! My aura protects me.
Morrigan Aensland: Well, Mr. Wright? Care to try again?
— Project X Zone 2

Nowadays, when Vampires are exposed to direct sunlight, they usually suffer great pain and diminishment of power, turn to dust, or go up in flames.

This trope is the opposite case: vampires are able to freely walk around in sunlight. Either nothing at all happens, or they experience mild discomfort. Sometimes they are stronger during the night, with daylight taking away some of their powers, but otherwise they are fine.

This was in fact the standard in traditional Vampire lore and early Vampire fiction. Lord Ruthven, Varney the Vampire, Carmilla and Dracula could all prance around in broad daylight, and while some of these might be accustomed to sleeping during the day, daylight in itself was no danger to them. The trope that daylight is lethal to vampires came into being only with movies, specifically with 1922's Dracula adaptation Nosferatu.

Sometimes a series may give a nod to this, or invent a "rational" explanation why some vampires can tolerate daylight and others can't. May play a part in Daylight Horror.

A common variation is to only have vampire/human cross-breeds be immune to sunlight (often among other vampire weaknesses).