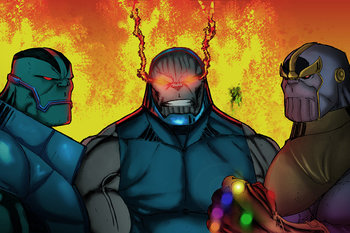 Just as Superman is often considered to be the prime example of what a Superhero should be, Darkseid pretty much defines what a "big league" villain looks like. They have a towering presence, a low-octave voice, a strong jawline, and a bald head.

Beyond design, Darkseid Duplicates often aren't just the archenemies of a particular superhero; they are broad-based villains who are foes to all of the local universe's hero community at large, and are either The Dreaded or at least extremely powerful — the "ultimate evil" so to speak. In order to have the clout needed to go with that status, they usually operate as a Galactic Conqueror or Omnicidal Maniac, much like the trope namer himself. They also have the ego (think A God Am I) and hamminess to match, and it is not uncommon for them to describe their superiority in great detail. Never content with the vast power they already have, they normally have an obsession with a particular artifact of power to further their might. Often this singular obsession is their downfall.

Darkseid himself is actually a comparatively young character (he first appears in 1970, as opposed to Superman, who dates from 1938) and only starred in a disconnected DC work (New Gods) which was not meant to be used outside that story. He has nonetheless proven so iconic that he (and the entire New Gods mythology) were incorporated into mainstream DC continuity, with Darkseid starring in nearly every DC universe adaptation since, often as the Big Bad. Numerous fictional works in the Superhero genre have since made at least one Alternate Company Equivalent or expy based on him. These expies always have at least a few of the following traits: