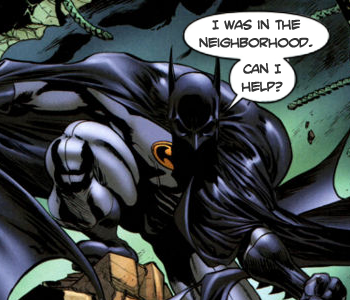 note And sometimes, very, very dark gray.
"So yes, black mages often can be evil. But black as a color is not inherently evil. Being influenced by black’s philosophies does not necessarily mean that one will commit an evil act. That being the case, we cannot say that black represents evil. More closely aligned with evil than the other colors? Fine. More ripe with potential for evil? Sure. Evil? No. And that's a very important distinction."
— Mark Rosewater, Making Magic: In The Black

Light Is Not Good, Good Powers, Bad People are sister tropes. For the inverse, see Dark Is Evil. A natural implication of the Yin-Yang Bomb. Contrast Evil Wears Black. May overlap with Mysterious Purple if the dark color is a shade of purple and "not evil" means morally ambiguous. See also Good All Along, Bad Powers, Good People, Creepy Good, Face of a Thug, Terror Hero, Perky Goth, Our Monsters Are Different, Anti-Anti-Christ, Reluctant Monster, Good Is Not Nice, Good Is Not Soft, and Halloweentown. When vampires are involved, this trope generally puts them on the friendly end of the Sliding Scale of Vampire Friendliness, often resulting in a Friendly Neighbourhood Vampire. Gods of the underworld and death in particular can be this, since Everybody Hates Hades.

Falsely convicted of the murder of his wife, Nathan Graves now punishes the guilty who've evaded justice as the otherworldy spectre, Tombstone.

Falsely convicted of the murder of his wife, Nathan Graves now punishes the guilty who've evaded justice as the otherworldy spectre, Tombstone.