Darker and Edgier
aka: Grim Dark 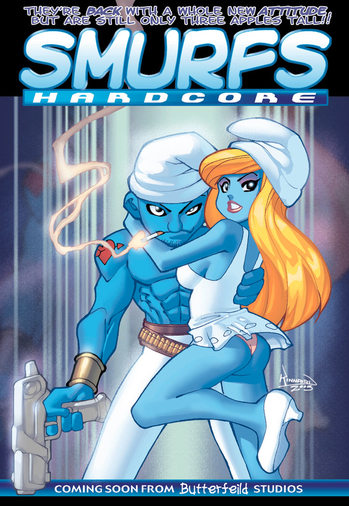 by RyanKinnaird. Used with permission.
"You look around these days... it's all different. It's all changed. The Joker's killing people, for God's sake! Did I miss something? Was I away when they changed the rules?"
— The Riddler, Secret Origins, "When Is a Door"
Advertisement:

As one could predict, this is fairly easy to screw up and poor use of these tropes may just result in Too Bleak, Stopped Caring if the setting gets too hopeless, or Narm if the edginess becomes just silly. This doesn't make it a bad trope though— when this is used subtly such as in the Harry Potter series, it can create the effect of a series growing up with its audience.

In fact this is often the purpose of a Darker and Edgier turn. Just as a Lighter and Softer tone is typically part of an attempt to bring a fictional world to children or to younger children, a "darker" tone is often intended to make a setting appeal to older children or adults. But unlike its opposite, a Darker And Edgier shift is often intended not to reach a new audience, but rather to keep an existing audience as it grows up. It can also be a result of child fans growing up as its creators and continuing to think of the setting as something aimed at themselves and their peers instead of the original target age group.

This trope became extremely popular in Comic Books as a rebellion against the Silver Age but also led to more than a decade of a lot of clumsy attempts by many writers to show that comics are "not kid stuff anymore." See the Bronze Age, the Dark Age, and '90s Anti-Hero for more details about how this worked.

This is a common result of an ongoing work suddenly becoming subject to less censorship than it had been previously (as was the case with the Comics Code fading away). When the writers had previously been scarcely allowed to depict any violence, swearing, or innuendo at all, but are then finally given permission, you can fully expect them to go wildly overboard with it for a while. This will of course attract some audience members and repel others, but eventually both the viewers and the writers will likely want to scale things back to some level between the original squeaky-clean version and the later R-rated version. note If the standard metaphor is a franchise trying to "grow up," one may compare this to a young adult getting a first taste of freedom, and then gradually learning self-restraint.