Dark Chick
aka: The Dark Chick 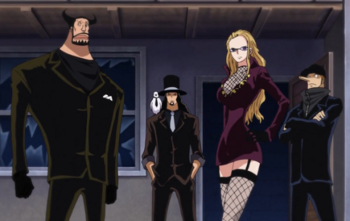 Hint: It's not the bird on that guy's shoulder.
"As the only female in Pazort's inner-circle, Kari possesses skills the others can only dream about."
— Shining Wisdom manual, under "Minions of Evil"
Advertisement:

Simply put, the Evil Counterpart to The Chick. She is often set up as a direct foil to The Chick, and a Designated Girl Fight will ensue if each sticks around long enough.

The Chick is often The Heart of the ensemble and is good at reading emotions, resolving fights, and keeping an eye on the big picture. The Dark Chick possesses all of these strengths, and weaponizes them:

This character archetype almost always overlaps with at least one other, most often:

Just as The Chick may be part of a Power Trio with The Leader and The Lancer, the Dark Chick tends to promote to Co-Dragon, or just become The Dragon of her team. If the Dark Chick is somehow related to the main villain, this chance rises to a near certainty. As do the odds of her leaving her boss, if his actions repulse her enough, for whatever reason, to hook up with The Hero or The Lancer, because Females Are More Innocent.

Having this character prominent adds a layer of the Interplay of Sex and Violence, particularly with male heroes in action series.