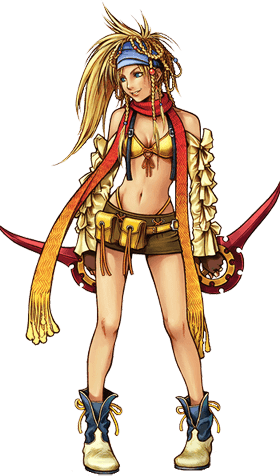 Dressed for kicking ass, while showing hers off.
Jerry Lawler: Whoever she is, I like what she's not wearing!
Coach: ...the crowd seems delighted.
Jim Ross: That woman can fight!
— Mickie James debuts, Monday Night Raw

This is a great way to show off her long legs, but the anticipation of getting an eyeful underneath is also welcomed, despite the bruises that might come from trying to sneak a peek. Sometimes, it doesn't have to be a skirt - it could be a minidress, a miniskirt, or a torn-apart garment that conveniently serves as a skirt. In addition, getting a Panty Shot isn't always guaranteed, but it can compensate by including Zettai Ryouiki, Stocking Filler or thigh high boots, to further emphasize the legs.

A skirt qualifies as dangerously short if it's high above the knees, prone to swirling aside (despite physics saying otherwise) and appears tight enough to ride up for a Panty Shot. Being an Action Girl is an added bonus, and a common subversion is to have her as a Faux Action Girl or a Neutral Female.

This trope does make a tiny bit of sense: if you're wearing a tight skirt into combat, you'd want it to be pretty short. The longer it is, the more it'll restrict your leg movements. However, wearing a looser, longer skirt would work just as well. Or wearing, ya know, pants. Or shorts.

Sub-Trope of She's Got Legs, Stocking Filler and Zettai Ryouiki.