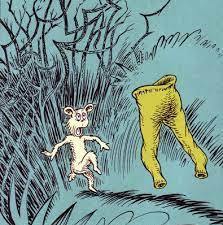 Then I was deep within the woods
When, suddenly, I spied them.
I saw a pair of pale green pants
With nobody inside them!
— Dr. Seuss
Advertisement:

Clothes can do a lot of things when worn by people. It can keep them warm, it can make them look cool, it can give them super-powers or turn them violently evil.

There are some weird articles of clothing that don't have to be worn by anyone to do things: somehow, they can move around with nobody inside 'em. For some reason, the disembodied clothing is usually a pair of pants. note Trousers for those of you Separated by a Common Language.