Damsel in Distress
aka: Distressed Damsel 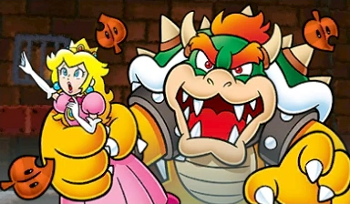 Just another Wednesday for Princess Peach.
"Why is she always the one getting kidnapped? I'm the princess!"
— Amalia Sheran Sharm, Wakfu
Advertisement:

This is a type of Living MacGuffin. Chained to a Rock is an ancient form; Girl in the Tower and Hypnotize the Captive came later. Damsels may also be Bound and Gagged or put into Unwilling Suspension, especially when it satisfies Author Appeal.

See also The Dulcinea Effect, Distress Ball, Standard Female Grab Area, I Have Your Wife, Save the Princess, Hostage MacGuffin. If the girl is actually faking this for her own benefits, depending on her purposes she's either a Deliberately Distressed Damsel or a Decoy Damsel. A damsel who rescues herself is a Damsel out of Distress who probably used an Improvised Weapon. If she has a strong spirit despite captivity, then they are a Defiant Captive. If the hero leaves the damsel in distress (for the moment), that's Delaying the Rescue. If the hero tries to rescue them even though they don't need rescuing, then The Victim Must Be Confused. See also The Captivity Narrative for a plot based on this.