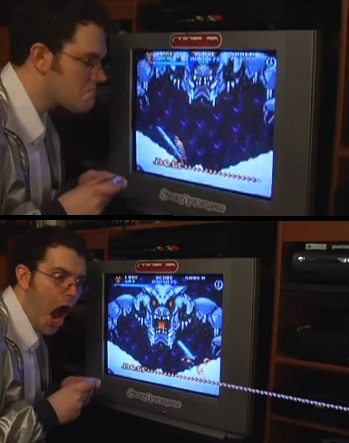 Gonna be fighting that boss for a while? Grab a Snickers.
"Whoa! Is that a long health bar, or are you just happy to see me?"
— Nathan Spencer, Bionic Commando (2009)
Advertisement:

The absolutely most basic type of boss monster in a video game, generally a Giant Mook or King Mook with much higher health than standard enemies and attacks that cause lots of damage. It generally makes no attempt to block or evade the player's offenses, so no special strategies are required — just attack it until it dies, or if you want to get really fancy, circlestrafe it. These sorts of bosses tend to become a battle of attrition where the player must spend large amounts of time grinding down the boss's health while avoiding making any mistakes. Can be considered the antithesis of a Puzzle Boss. Mostly prevalent in Japanese RPGs and the FPS genre.

It doesn't make a difference whether it just has a humongous life bar, or extremely high defense so it only takes Scratch Damage, or that it has Regenerating Health almost as quickly as you damage it; in all cases, depleting its life bar takes forever. But if there's a trick to negating its defense or regeneration, you have an example of Puzzle Boss instead. Put this kind of boss on a time limit and you'll have lots of very angry players.

Named after an industry term for this type of boss, whose main attribute is that they can soak up damage like a sponge absorbs water. Their primary way of defeating the player is holding out until the player makes enough mistakes for their Life Meter to run out.

If the HP is really high and the boss doesn't have any interesting moves, you have Fake Longevity.

Related to Smash Mook, When All You Have is a Hammer…, Health/Damage Asymmetry, and Marathon Boss. God help you if this overlaps with Sequential Boss. Contrast Rush Boss, which goes down fast but hits hard to compensate.

Alternative Title(s): Damage Sponge, Hit It Until It Dies