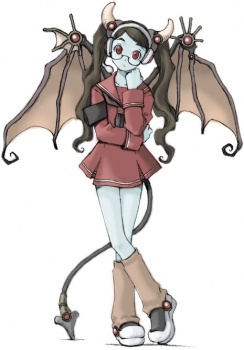 Any "exotic" being (alien, monster, robot, demon, ghost, etc.) bearing a strong resemblance to a conventionally attractive human female, sometimes when there is no reason for her to appear that way.

This trope comes in several varieties:

A function of Men Are Generic, Women Are Special, specifically the idea that male monsters can look... well... monstrous, but female monsters need things to differentiate them from the male monsters and make them recognizably female to the audience (and by "recognizably female" we usually mean "clean, slim, and attractive."). When the Male Gaze gets involved this results in common design features for female characters in other contexts, like Hartman Hips, Non-Mammal Mammaries, long hair, and Tertiary Sexual Characteristics like dresses or make-up (or bits of anatomy designed to look like a dress or make-up), even if it would make no sense for such a creature to have these features. While this is often done for purposes of Fanservice it can also be for What Measure Is a Non-Human? reasons, as the audience is more likely to sympathise with a Monster Girl who looks more human than one who looks more monstrous. Conversely it can be done for Grotesque Cute reasons, contrasting the monstrous and cute side, especially if they still act like the monster they're based on — villainous CMGs in particular are very likely to be Literal Man Eaters.

Female One Gender Races are typically these. Although very rare in works targeted towards men, the Spear Counterpart Cute Monster Guy, is quite common in Shōjo, Josei, Boys' Love, Otome Games and other media marketed to women. The most common example is vampires. However, younger variants of the traditional definition of "cute" (i.e. children) for both genders are a bit more common. Assume that if there is a Monster Mash, the few female member(s) will be Cute Monster Girls. May involve Stripperiffic designs. If there's more than one of them, they'll often have remarkably similar builds.

This character type can also be used as a basis for studying social differences and similar themes, since monster girls are pretty, cute and different at the same time to attract a wide audience and detail problems arising from differences.