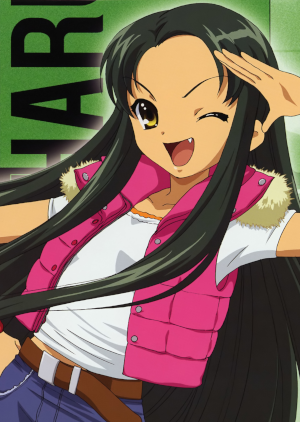 A mathter at work, nyoro.
"Glistening white triangular tooth
Open up a can of tomato juice
I've got a fang
I've got a fang."
— They Might Be Giants, "I've Got a Fang"
Advertisement:

Most often, as suggested by the trope name, the character sports enlarged canine teeth. For maximum cuteness, at least one fang will be visible at all times, even when the character's mouth is closed, and especially if they have a Cat Smile. These indicate, generally, that the character is mischievous, slightly hostile, or a trickster, but not actually "bad."

Cute Little Fangs are pretty much a standard feature of Cat Girls, Cute Monster Girls, and other character types who fall under Little Bit Beastly. Ugly Cute critters tend to have these as part of their unconventional brand of cuteness.

Usually limited to comedies. Does not normally apply to Western-style vampires (they do have fangs, but not the endearing kind).

May be related to traditional Japanese supernatural monsters such as oni, who are usually depicted with tusks or fangs meant to look rather comical instead of outright frightening. (This is explicitly the case in Urusei Yatsura, where a number of characters are Ancient Astronauts versions of oni and other supernatural creatures.)

This trope is also Truth in Television. Many baby animals, whether of the carnivorous persuasion or the simian persuasion, sport them. In some cases, the eye teeth can be naturally pushed forward, hence giving one a semi-fanged appearance. Some domestic cats in particular, even as adults, have a tendency to have longer than normal fangs that gives them this look. In Japan, this is called "yaeba" (literally, "double teeth") and is regarded as cute. Many girls actually undergo a surgical procedure to achieve this effect.

Fangs Are Evil is usually the Evil Counterpart to this trope, but the two can overlap if the writer is trying to invoke Cute Is Evil. Contrast Scary Teeth.