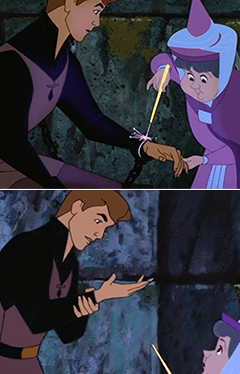 Rachel: (re: Chandler rubbing his wrists) Does it hurt?
Chandler: No, I just always see guys doing this when they get handcuffs taken off them.
— Friends, "The One With the 'Cuffs"
Advertisement:

A character has been shackled or put in handcuffs and upon being released they must rub their wrists. Somehow this not only stops the pain but removes all physical evidence that the character was chained up to begin with. In fiction land, having your hands tightly bound for long periods of time usually only causes mild discomfort.

Mute Amaya rubs her wrist after getting uncuffed.

Mute Amaya rubs her wrist after getting uncuffed.