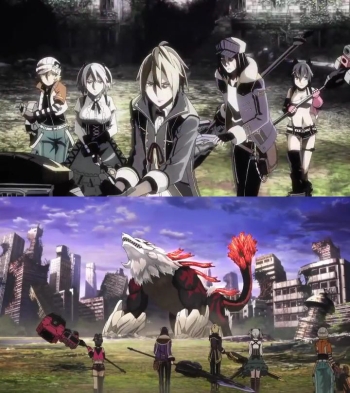 Gods will fall, humanity will rise...
"They counted on the humans to hide, to give up, to fail. They never considered our ability to stand, to endure, that we'd rise to the challenge."
— Raleigh Beckett, Pacific Rim
Advertisement:

In a World…note usually without The Masquerade where humanity is terrorized by a race of Nigh-Invulnerable behemoths. Humanity is at a disadvantage, but at some point, they discover their enemies' weakness, and now have a fighting chance. And thus begins the tale of their struggle.

The monster's origin usually vary from being simply aliens (or Angels & Demons or Robots & Golems); to coming from a single Hellgate; to being a result of Creating Life Gone Horribly Wrong; to being a mutant strain of an existing lifeform ; or a beastly sort of Henchmen Race created by the Big Bad; to simply just popping out of nowhere. Whatever their origin. There will already be quite a lot of them already by the time the story kicks in.

Whatever their origin, they will always be Nigh-Invulnerable (or just Made of Iron) or have Healing Factor which makes them hard to kill. This doesn't mean they are invincible though. These monsters usually have an Achilles' Heel — usually in the form of Applied Phlebotinum that is the only thing that can harm them (which our organization would exploit as weapons), or a certain weak point in their body, which is usually a core placed in a strategic part of its body.

by John Joseco features The Swords of Ariel, one of several hunters guilds in this comic's world. Main character Kessah is a junior member of said guild, working her way up the ranks, trying to live up to the reputation of her late sister, Diana, 'The White Wolf.'* It should be noted that Diana was stated to be killed not by a monster, but by a rival guild.
Web Animation
Web Original
Web Video
Western Animation