Crapsack World
aka: World Half Empty 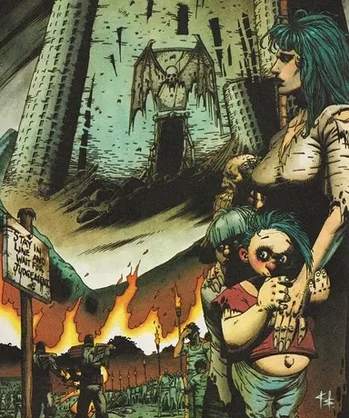 And this line is only for the jaywalkers...
"The optimist thinks this is the best of all possible worlds; the pessimist fears it is true."
— James Branch Cabell, The Silver Stallion, misattributed to Robert Oppenheimer
Advertisement:

A Crapsack World is a horrible setting where the jaded notion of "anything that can go wrong will go horribly, horribly wrong" almost always applies, and it corrupts its inhabitants into perpetuating that nastiness against each other. More succinctly, trying to survive in one of these places is gonna suck.

Although there are countless ways Crapsack Worlds can be depicted (often with Scenery Gorn), it is usually dark, and on the cynical end of the Sliding Scale of Idealism Versus Cynicism, so it will have either Grey-and-Gray Morality or Black-and-Gray Morality, if not outright Evil Versus Evil in the worst of cases (beware of Too Bleak, Stopped Caring if you decide to go this route though). Settings like these are not kind at all to idealists, who usually get traumatized and/or die horribly when their attempts to change the world through idealism meet tragic ends.

From here, these worlds can be depicted by authors in various ways, whether it would be dramatic or comedic, immutable or mutable. Though most of the time immutable equals dramatic, it is possible to see combinations between these categories:

For worlds that are almost literal sacks of crap see The Dung Ages. See You Would Not Want to Live in Dex for other crapsack environments, and (on a less negative note) the World of Badass which is also likely to have elements of the Crapsack World, to give justification on why kicking ass is very important to survival. Compare World of Jerkass, a world which is only unpleasant because all of the characters are horrible people.

No Real Life Examples, Please! This is not a subjective trope; this is a metaphysical trope that's clearly defined by the writer, not an opinion by people complaining about the world as a whole (localized places that are very horrible in Real Life should perhaps go to Wretched Hive and other non-metaphysical tropes instead). Also, do not use this page to complain about worlds you don't like. If you have to say "Some people think" or "Arguably," it doesn't belong here.