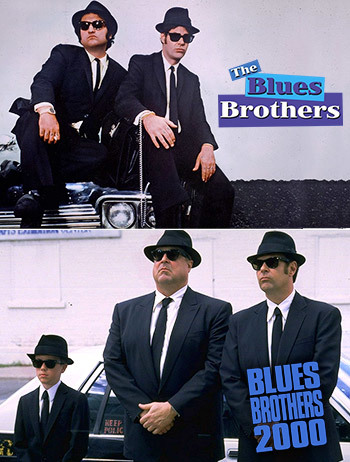 ...introducing Buster!
"Do? What does he do? Why, he's adorable! And people will love it!"
— Dr. Forrester, MST3K
Advertisement:

Cousin Oliver is that inexplicable kid added to the show's roster, usually in an attempt to liven up an aging cast with a character the younger demographics can (supposedly) relate to. However, such a character is likely to upset the dynamic of the show, especially since his only job is to be cute and innocently wisecrack. It's far too easy for the writers to miss "sweetly precocious" and tumble right into "overbearing and annoying", especially to the show's long-time fans (who don't see why this kid should be taking attention away from their favorite characters anyway). Depending on how deft the writers are at making him "lovable," Cousin Oliver can become a fan favorite Ensemble Dark Horse or The Scrappy (or worse).

Sometimes Cousin Oliver is the logical result of a character's season-long pregnancy arc. Once the writers have exhausted the possibilities of new baby hijinks, the infant undergoes Soap Opera Rapid Aging Syndrome — or even a Plot-Relevant Age-Up if the setting allows for it — so they can become a regular member of the cast. This doesn't always make it better.

Compare Kid-Appeal Character, who is generally there from the beginning. If the addition is a literal cousin, see also Nephewism. The character will often be a Token Houseguest.

Often a form of Jumping the Shark. If there's actually an in-series point to the character, compare Cain and Abel and Seth.