Cosmic Entity
aka: Cosmic Being 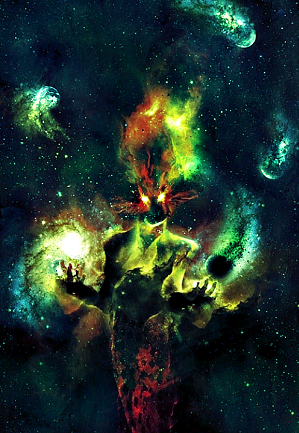 The Juggler of Worlds, Aurelien Police
Ego: What madness do you mouth? You are but a single being, and I a world entire!
Galactus: The words you speak are true! In all of space I stand alone... but I have no need for an ally, for I am Galactus! The be-all and the end all am I!
— The Mighty Thor
Advertisement:

A cosmic entity is any being so great it can inherently affect entire planets, stars, galaxies, and possibly even the entire universe (or in some cases, entire multiverses.) If there is more than one such entity in a setting, there will usually be different levels of power between them, and often specific responsibilities as well, forming a kind of Fantasy Pantheon.

Cosmic Beings tend to not care much about "lesser beings" (anybody who isn't "cosmic") and any harm (or good) they cause is often unintentional. Because of their level of power, when they cause trouble the heroes are often forced to try to reason with them, use a Cosmic Keystone, or ask another Cosmic Entity for help (very rarely can they punch them out.)

A cosmic entity could be any of the following: