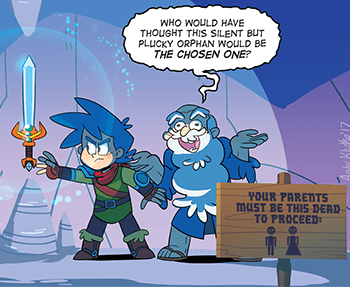 Dead mentor figure optional (for now).
Refia: I am thankful to Father for taking care of an orphan like me for all these years, but... this is something I have to do.
Luneth: Wait... you're an orphan, too?
Refia: "Too"? You mean—
Arc: I'm one, too!
Ingus: Wait a minute... I, too, have no parents...
— Final Fantasy III (DS translation)
Advertisement:

All people come with a past, a family, friends, a heritage, and more. Every person has roots!

This past can become a large burden on the character: They need an excuse to leave their family behind, or need to constantly visit their parents and other family members in between adventures. Otherwise the hero can't believably be a social, likable good guy.

Orphaned heroes, on the other hand, never have to deal with all that. They don't need an excuse to go on wild adventures or stay away for days on end, they don't have anyone waiting around for them to come home! Conveniently, these heroes can answer the Call to Adventure because they don't have other responsibilities.

Often used as character backgrounds in tabletop adventures: Such a character's background often consists of "My parents were killed by (insert Always Chaotic Evil race here), so I'm out for revenge." Aside from conveniently leaving no 'annoying' ties to the past to keep the character away from the Call to Adventure, it can also result in a You Killed My Father moment should the villain race (or the Big Bad if he's responsible) appear.

Handily prevents the sadistic Game Master from exploiting 'weak links' that can get kidnapped or killed off. If the fates of the missing parents are left nebulous, it also opens the door for that infamous twist where one of them turns out to be a villain. You know the one.

Oddly enough, family outside of parents is never mentioned. Apparently no one ever has grandparents or cousins, although having an uncle (and sometimes aunt) as surrogate parents is common. Siblings (if they exist at all) seem to only show up for plot-based reasons — and not Promotion to Parent, which would give them responsibilities. One wonders how the world manages to get populated when every couple only has one child. Surrogate parents show up more regularly in the form of Raised by Natives, they tend to die a lot too.

The hero's orphaning is also a nice triggering point for the hero's journey. This part of the Hero's backstory is often covered in a Flash Back. If the orphaning happens at the very beginning of the story, instead of in the background, it's usually covered by Doomed Hometown.

If the character does have parents, but they have so little influence on their life that they behave as if they have no family responsibilities anyway, or it just isn't talked about period, it's Parental Abandonment.

May lead to Tell Me About My Father!.

Contrast with Orphan's Ordeal, where the loss of parents is the plot (or at least a subplot), rather than simply enabling the plot.

If the parents happened to be Good Parents before their death, so much so that they continue to affect the main character even after they're dead, then you've got Deceased Parents Are the Best.

Not to be confused with Self-Made Orphan.