Complexity Addiction
aka: Evil Is Stylish 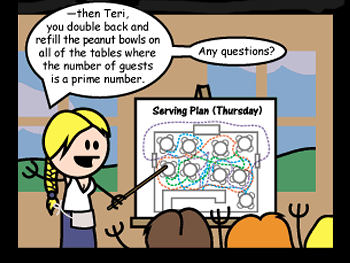 Let's hope no one asked for her to repeat that.
"What's he up to now? It'll be something devious and over-complicated. He'd get dizzy if he tried to walk in a straight line."
— The Rani (about The Master), Doctor Who, "The Mark of the Rani"
Advertisement:

A character comes up with a ridiculously elaborate plot that is so meticulously planned out that it can't possibly fail. But of course, it will. So why didn't they come up with a simpler plan?

Because the character has a Complexity Addiction. They simply can't help themselves from coming up with schemes that are far more complicated than they need to be. These plans might have glaring flaws to everyone else, such as relying entirely on luck or unpredictable factors, missing a few steps in the plan, not really think through the plan or being unable to fill in the gaps when asked about it, and maybe even grabbing the Idiot Ball with how complex they're making this whole thing out to be. But for whatever reason, the character simply can't help but make an overdone, overblown plan for even the most simple of tasks.

Maybe they're insane. Maybe they're bored. Maybe they view it as being artistic. Maybe they're really smart and want people to see how smart they are. Maybe simple plans aren't as amusing or as evil or are just too boring for them. Maybe they consider their enemies worthy opponents and that only an equally worthy plan should be used to defeat them. Maybe they don't even know the reason. It's Funny, or it's Dramatic, or it's Cool; that's all that matters.

If a work's creator ever shows a character with a Complexity Addiction making a plan, the Unspoken Plan Guarantee assures that this plan is not going to work. The reasons for this can be summed up by the classic KISS design principle: "Keep It Simple, Stupid". The more complicated a plan is, the more places there are that a plan can fail, and thus more opportunities for drama. Also, including such a plan onscreen and then executing it to perfection would mean that the creator just put a spoiler for their story in the work itself. Generally speaking, you can expect the complicated plan to fail whenever it's put into action. From there, the plan may just be made up as it goes along, with some Xanatos Speed Chess necessary to try and salvage whatever's left of the plan.

Expect a smarter character to point out the existence of a simpler solution, often something along the lines of "Why Don't You Just Shoot Him?" These characters frequently suffer from Bond Villain Stupidity. May overlap with Villain Ball.

See also A Simple Plan, where a very simple plan should have worked, but goes horribly awry. Compare Awesome, but Impractical, Zany Scheme, and Combat Aestheticist. Contrast Combat Pragmatist. See also Didn't See That Coming and Cutting the Knot. Additionally, see Rube Goldberg Device for machinery built by people with a Complexity Addiction and Puzzle Thriller for stories built for them. Compare Overcomplicated Menu Order for a similar situation, but with food/drink.

open/close all folders
Anime and Manga
Comic Books
Comic Strips
Fairy Tales
Fan Works
Film — Animation
Film — Live-Action
Literature
Live-Action TV
Kramer: All right, Coney Island. Okay, you can take the B or the F and switch for the N at Broadway Lafayette, or you can go over the bridge to DeKalb and catch the Q to Atlantic Avenue, then switch to the IRT 2, 3, 4 or 5, but don't get on the G. See that's very tempting, but you wind up on Smith and 9th street, then you got to get on the R.
Elaine: Couldn't he just take the D straight to Coney Island?
Kramer: Well, yeah ...
Music
Professional Wrestling
Tabletop Games
Theatre
Toys
Urban Legends
Video Games
Visual Novels
Webcomics
Web Original
Western Animation
Real Life
Feedback