Comics Rule Everything Around Me 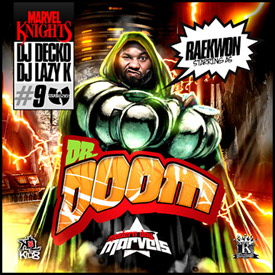 Pictured: a man who talks about selling crack on a regular basis.
"Lupe steal like Lupin III"
— Lupe Fiasco, Touch the Sky

Being a good rapper requires a deft command of the English language, as well as a large knowledge of popular culture. The best rappers pile wordplay upon wordplay, employing strange rhyme schemes and complicated metaphors, as well as references from every conceivable era and field. For rappers that produce tracks as well, they often have to search for the most obscure and esoteric samples possible, from old soul records to cartoon themes. All this requires a certain nerdy mindset. Thus, many good rappers tend to be nerds.

Tends to show up in rappers that are more critically acclaimed than popular, though there are exceptions.

Trope is named for Trope Codifier Wu-Tang Clan's song C.R.E.A.M., which stands for "Cash Rules Everything Around Me."

Often overlaps with Black and Nerdy. Compare with Heavy Mithril, the Heavy Metal equivalent, and Filk, the Folk Music equivalent.