Collector of the Strange
aka: The Collector Of The Strange 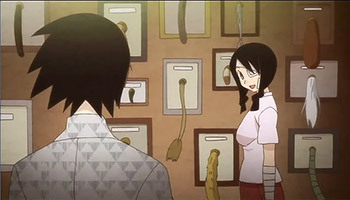 Don't worry, she pretends they're fake.
Janine: Do you have any hobbies?
Egon: I collect spores, molds and fungus.
— Ghostbusters (1984)
Advertisement:

People collect things they like: movies, stamps, hummel figurines of baby animals, bottle caps, books and action figures. It's only natural for those individuals who have a specific hobby to develop a fascination with acquiring memorabilia that is directly related to their outlet of interest. Such a pattern of human behavior is quite normal and is relatively accepted in society.

However, there are those people who, because of their unique occupation or lifestyle, collect items that are too dangerous, rare or gross for the average human being to even want to own. For those people who gather anything of the bizarre and strange, this trope page is for you.

May have a Friend in the Black Market. A group of these might form an Artifact Collection Agency. For the superhero version, see Superhero Trophy Shelf. A more mundane version would be the Trophy Room. Room Full of Crazy is this taken to its logical conclusion. See also Secret Government Warehouse. A specific variant only wants things (and at times people) who are unique and one of a kind. Compare Creepy Souvenir, for when morbid items (often body parts) are acquired as trophies.

See also The Collector, driven by the need to collect someone in particular, or the Living Doll Collector, who transforms the living into a collection of custom toys.

While talking to Janine, Egon reveals his strange hobby of collecting spores, mold, and fungi.

Alternative Title(s): The Collector Of The Strange

While talking to Janine, Egon reveals his strange hobby of collecting spores, mold, and fungi.