Cobweb of Disuse
aka: Cobwebs Of Disuse 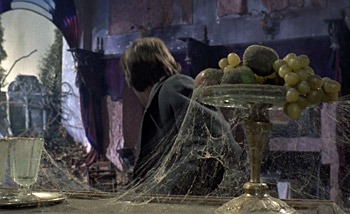 "This only proves what I've long suspected: grapes are eternal."
A cobweb or two is often used as a sign that something hasn't been used or hasn't moved in a while. This is a standard part of the decor in Haunted Castles and Haunted Houses, so much so that white fibrous decorations simulating cobwebs appear in stores every October.
Advertisement:

In Real Life, this is only partially true. A spider only needs a few hours to build a web on something. On the other hand, not regularly removing cobwebs from something will allow dust to build up on them, making them a lot easier to see.

Taken to extremes, this can become a Cobweb Jungle. Compare Bat Scare and Wallet Moths. See also Trash of the Titans and Extremely Dusty Home.