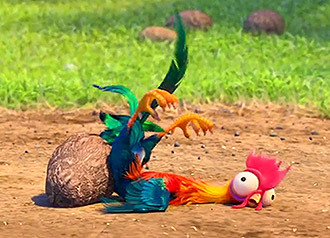 "He seems to lack the basic intelligence required for pretty much... everything."
"Remember: Wit, satire, clever sayings, puns... none of this is as funny as a man in a chicken suit!"
— Garfield, Garfield and Friends
Advertisement:

Chickens — small flight-inhibited birds with a tendency to break out in screeching panics over the smallest things — are inherently funny, like ducks, penguins and monkeys, maybe because they're being Comically Serious. Unlike penguins and monkeys, they're also regularly eaten (they taste like chicken). And that's pretty much it. This isn't really a family of tropes that has a whole heck of a lot of logic behind them.

Some useful notes on chickens. The domesticated chicken is known scientifically as Gallus gallus domesticus. They were most likely domesticated in India and Southeast Asia 8000 years ago, bred from the Red Junglefowl (Gallus gallus) found in the region's rainforests, probably with some Grey Junglefowl hybridization tossed in. The domesticated chicken passed from India to the whole Old World, reaching China in prehistoric times, the Middle East by 2000 BCE, Africa by 1400 BCE, and Europe by 1000 BCE. They are the most common bird on the planet, some 24 billion strong — in other words, they outnumber human beings more than three to one.

Also, the Romans practiced augury: reading the future from the acts of birds. Chickens were the most common; the state had official flocks of fortune-telling chickens, as did each ship and legion.

"Chicken" is also slang for Dirty Coward, possibly due to their tendency to run away squawking from any sign of danger (and they're surprisingly fast runners). Imitating a chicken's "bawk, bawk, bawk," is thus a classic way to tease someone for being scared, which may lead to the retort "Nobody Calls Me "Chicken"!" Alternatively, someone might play a Game of Chicken to see who's the first to chicken out, such as running into traffic, and hoping that other drivers might chicken out and stop before they either hit you, or you decide to reconsider your stupid decision.

Roosters, i.e. fully grown male chickens are often an exception from the comical portrayal, depicted as boisterous, violent animals instead.

Then of course there's the venerable Chicken Joke that raises the conundrum of why she decided to cross the road. Interestingly, it's believed that the joke was originally an example of Anti-Humor, beginning with what appears to be a standard setup for a comical punchline, but instead offering the mundane factual answer "To get to the other side." The effect is somewhat diluted since we've all heard it a million times, but tons of variations on the premise exist. This is an overlap with this trope since the reference to the chicken is funny in itself. (Imagine the same joke as "Why did the cow cross the road?" and you'll see it.)

The comedic nature of chickens is often used to bring levity to a Chickenpox Episode. While the real disease isn't very fun and has nothing to do with chickens, many works make it funnier by having the afflicted characters literally act like a chicken or even transform into one.

Also, being birds, chickens are members of the Maniraptora family of the theropod dinosaurs. Like all other avians, they are in fact under the group of Paraves, which along with true birds, also contains their close relatives, the famous deinonychosaurs such as Velociraptor.

Repeat: CHICKENS ARE MODERN-DAY LIVING DINOSAURS AND ARE CLOSELY RELATED TO RAPTORS. Chickens deserve a bit more respect due to this.

Yes, technically chickens are a literal Real Life example of Domesticated Dinosaurs. In the modern age, you eat Raptor... and it Tastes Like Chicken. Oh, How the Mighty Have Fallen.

As noted in the Real Life folder, chickens’ actual temperaments will vary from breed to breed, but even the ones that are friendly to humans are still omnivores and can eat anything with the misfortune of landing in their pen (often mice, lizards, frogs, and snakes). And if they’re starving, they'll try to eat a sick or injured member of their own.

Not to be confused with What's a Henway?

Alternative Title(s): Nobody Here But Us Chickens, Everythings Better With Chickens