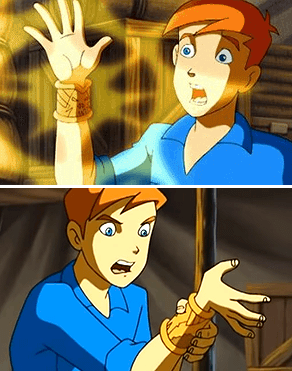 Poor kid has to spend the rest of the series finding another MacGuffin just to get rid of this one!
"How many times have you flung a magic ring into the depths of the ocean, and when you come back and have a nice bit of turbot for your tea, there it is?"
— Nanny Ogg, Wyrd Sisters
Advertisement:

Ben's alien wristwatch is permanently attached to him and can't be removed... at least not with his dad's tools.

Ben's alien wristwatch is permanently attached to him and can't be removed... at least not with his dad's tools.