Climbing the Cliffs of Insanity
aka: Cliffs Of Insanity 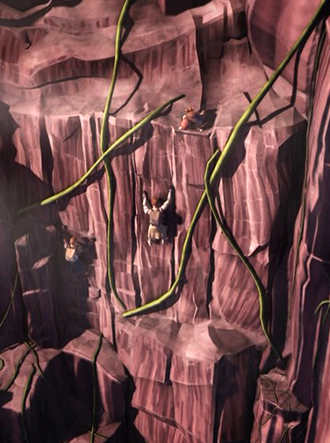 Whenever an obstacle arises in an action or adventure story, it is usually this. Often encountered on the way into Mordor, it is also found in urban settings. Cliffs of Insanity can be natural or man-made; if the latter, they may involve Le Parkour or a Clock Tower.

What they all have in common, however, are the invisible arrows shouting "The plot goes this way." To simply go around (or take the elevator/tram ride) would be inconceivable. One must take them head-on; and just to be sporting, with whatever safety equipment they didn't think to bring along with them ahead of time.

Whether or not he was known to be in the area, the villain will invariably Cut the Safety Rope before the hero can make it to the top. Fortunately, the hero will grab a ledge or something and reappear. He/she will invariably need an assist for the last 5 feet of the climb. If the hero or villain is being pursued, he will invariably pick the tallest point in the landscape and climb that (although that is a trope in itself). And at some point in the climb, expect to see a Plummet Perspective to emphasize the danger if the climber should fall.

This is a super trope dealing with Insane Precipices. This deals with the strange properties of these (mostly) fictional features, such as their apparent unavoidability. Bizarrely averted in Role Playing Games by Insurmountable Waist-High Fence, which is the opposite of this trope. Usually involved in a Climbing Climax. Not to be confused with Mountains of Madness.

See also It's All Upstairs From Here and Scaling the Summit.