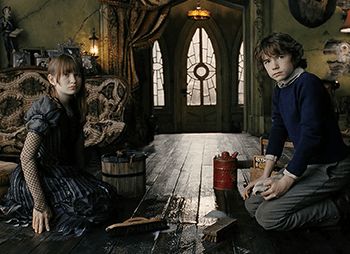 Rather unfortunate indeed.
"Work hard enough, and you can go to the ball...room. Which is even dirtier."
— Count Olaf, A Series of Unfortunate Events (2017)
Advertisement:

When characters in rich — or at least comfortable — situations suddenly find themselves at the bottom of the pile, often forced to become servants in their own homes. Since this is usually because of family circumstances, the death of the main breadwinner may be involved, especially if Mom or Dad remarried before passing, because the step-parent isn't likely to give the "old children" any share in the estate, especially if they have children of their own.

As in the tale of Cinderella, then, the newly-impoverished children have to find a way to success and happiness without the guaranteed support of their parents: sometimes through hard work, sometimes through outside intervention. In most cases it's implied — if not outright stated — that everyone can see the inner superiority that they possess as members of a better class, despite their current humility.

Rags to Royalty may ensue.

If the stepparent has their own children, it can overlap with Rich Sibling, Poor Sibling, with the impoverished children’s situation making them the Poor Sibling, while their sibling or step-sibling is spoiled and pampered by the cruel parent. Can overlap with this trope, but the poor children don’t need to have spoiled siblings or sibling-figures to be in Cinderella Circumstances.

Changeling Fantasy is a more upbeat variation of the concept in which the child imagines themselves to be a Foundling of Royal Blood instead of an unappreciated stepchild. Not to be confused with Changeling Tale, in which the child is abused and discarded because he's actually one of The Fair Folk (the original baby was stolen long ago). See also Evil Uncle. Not quite the same thing as Rags to Riches. Sister Trope to Kids Hate Chores.

Compare Scullery Maid, Guess Who I'm Marrying?. Contrast The Frog Prince and related stories where the heroine must learn to live with an animal (often as a metaphor for making the best of an Arranged Marriage).

For other tropes associated with Cinderella, see When the Clock Strikes Twelve, The Girl Who Fits This Slipper.

Harry is abused and exploited by his aunt, uncle, and cousin.

Harry is abused and exploited by his aunt, uncle, and cousin.