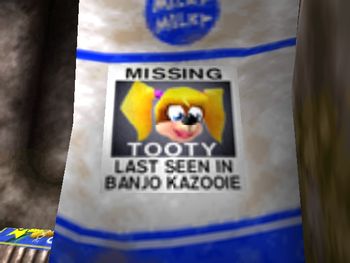 They were well aware of this and milked it for all its worth.
"Let us pause to reflect on the sacred mystery of Richie's elder brother Chuck, who ascended the stairs with his basketball in season one, and never came down again."
— Peter Griffin, Family Guy, "The Father, the Son, and the Holy Fonz"
Advertisement:

Generally, if writers want to remove a character from their ensemble, they will either kill that character off or put them on a bus (or both) to explain their absence. Sufferers of Chuck Cunningham Syndrome, on the other hand, simply disappear into limbo. They will often be retconned right out of the story's history, and everyone still left onscreen will simply carry on as if the character never existed or had any impact on the story. This is sometimes caused by the writers gradually losing interest in the character and, without making a conscious decision to remove them, eventually forgetting about them entirely. More often, complications behind the scenes drive the decision to remove a character. Alternatively, the character may not have had an important role despite being part of the main cast, in other words being a Satellite Character or Flat Character.

The trope namer is Chuck, who was Richie and Joanie Cunningham's older brother in the first two seasons of Happy Days. Remember him? No? Neither did the show. In later seasons, both Cunningham parents said they only had two children and Chuck was wiped from existence. With Fonzie becoming a main character by the second season, and now firmly in the big brother role for Richie, the little-used Chuck wasn't needed.

A subtrope of Un-person, although this isn't necessarily intentional. Similar in spirit to The Other Darrin, wherein a character's actor or voice is replaced and nobody in-universe seems to notice or care. Ironically, Chuck Cunningham suffered from this as well since he was played by two different actors. Gavin O'Herlihy in season 1 & Randolph Roberts in season 2. Also see Out of Focus (when a character is gone but not quite forgotten), Sequel Non-Entity (a subtrope concerned with a character not returning for a sequel in particular rather than vanishing from the series as a whole), and Shoo Out the New Guy (where a character gets at least an excuse in the show for disappearing). Contrast with Remember the New Guy?, where someone comes in out of nowhere sometime midway through and the series acts as though they've been there the whole time. For characters who are written out of the main story but are still hanging around in view, see Demoted to Extra. For characters who are specifically brought in for a one-shot purpose, see Long-Lost Uncle Aesop. For characters that are given a reason for their departure and an onscreen send-off, see Put on a Bus. Compare Forgotten Fallen Friend. If a character appears in the pilot or very early episode of a show and then vanishes it may be a case of Early-Installment Weirdness. See also Written-In Absence. Present Absence is when this is averted and a character's absence is not only noticed in-story, but is often a major driver of the plot. What Happened to the Mouse? is this for minor aspects like side characters or subplots. Absent Animal Companion applies this (in most cases) to pets and/or animals that disappear once their plot relevance is gone.

When this happens in-universe, with the character having their existence literally erased, it's a Retgone.